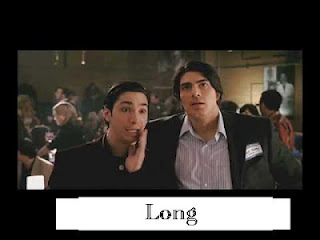 I consider Kevin Smith somewhat of a personal hero of mine.  Not only is he not afraid to take chances (Red State) but this guy dropped everything he had into his first movie and he was successful and got the chance to keep making movies.  Yes, he’s hit a few roadblocks along the way (being too fat to fly, “imploding” at Sundance 2011, “Cop Out“) but the guy makes movies for his fans, and not to mention himself which I respect.

When “Zack and Miri Make a Porno” came out there was some fan fare, and it did decent in the theaters, but for me the standout was one scene with one character and one actor with the surname “Long.”  In genius cameos, Brandon Routh aka the Superman that everyone hates aka Dylan Dog aka Todd Ingram, plays Bobby Long, the high school heart throb that Miri (Elizabeth Banks) has always been secretly in love with.  Meanwhile Zack (Seth Rogan) has recently made the acquaintance of one Brandon St. Randy (Justin Long) a film star most famous for the coming-of-age tale “You Better Shut Your Mouth Or I’m Gonna Fuck It.“

In five short minutes Justin Long and Brandon Routh received pardons from me for both “Live Free or Die Hard” and “Superman Returns,” respectively.

Fun fact: Kevin Smith wrote one of the original scripts for a Superman re-boot that involved a giant spider (later taken by Wild, Wild West). “Zack and Miri” stars an actor who played Superman, while Kevin Smith co-starred with Justin Long in “Live Free or Die Hard“.