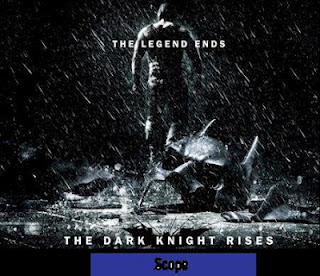 Growing up, I could give a damn about DC Comics.  I couldn’t relate to Superman, Wonder Woman was a chick, and I didn’t have any jewelery, so screw the Green Lantern.  Hell, I’ll say it, I didn’t even care about Batman.  It took me a long time to really develop a relationship with The Dark Knight being that I was way more of a Marvel Man anyway.  I don’t remember going to the theaters in 1989 to see the second “Batman” movie (yes, I’m still counting the Adam West “Batman” movie as the first one) but I distinctly remember going to the movies in 1992 with my parents to see “Batman Returns.”  It wasn’t like anything that I had seen before: Dark, moody, Gothic, and the music (don’t get me started, I’ve been a Danny Elfman mark since “Beetlejuice“)  But even while being impressed by “Batman Returns,” I never got into the comics, I still cared way too much about X-Men and even Image Comics’ “Spawn.”

This brings me to Chris Nolan, the man who took over the Batman franchise after it had been thoroughly fisted by Joel Schumacher and his bat-nipples.  Nolan, who had already made a name for himself with “Memento,” was the last person you would have thought could helm a Batman re-boot, but people thought the same thing about Tim Burton after he did “Pee-Wee’s Big Adventure” and the aforementioned, “Beetlejuice.”

Within Nolan’s Gotham City, the Scope increased movie by movie, moving away from one man’s fight against crime to a city finally banning together to fight against a force so big that it even overwhelmed Batman.  “The Dark Knight Rises” takes many of its cues from three books in my opinion:  “The Dark Knight Returns” “Knightfall” and “Vengeance of Bane II.”  Moving away from the fantastic elements of these books, Batman, and Bruce Wayne, face real world problems such as lost friendship, hopelessness, and bankruptcy, and it is just enough to wear him down to the point of Bane being able to “break him.”  With Batman out of the picture, the movie points the focus directly on Gotham, its police force, and average citizens, and this is my biggest problem with the movie.  The point of the Batman is to inspire average citizens to step up and take on an enemy greater then them and fight.  The movie really only comes down to a few characters, mostly cops, who fight, while the citizens are huddled in their home, hiding.  I have a problem with this, and while Blake (Joseph Gordon-Levitt) tries to inspire the citizens drawing Batman insignias on walls, it seems like a forced act from Nolan.

But this is a small gripe, and takes nothing away from what Nolan has created;  a living, breathing city that you actually care about and don’t want to see destroyed.  There are points in the movie where you completely forget that this is a Batman movie, which is amazing, and tells you something about the filmmaker, who has crafted a story that could, unfortunately, happen.

As far as acting and characters go, I enjoyed Tom Hardy as Bane, even if he did sound a lot like an out of breath Sean Connery.  I thought his eyes told his story, and despite the fact that he was a ruthless terrorist, you still saw a human being looking for his place in the world, very much like Batman in the counterpoint.  Anne Hathaway was fine as Selina Kyle, and you did see some sassy Michelle Pfeiffer in her acting and mannerisms, and the more I think about it the addition of an extra “hero” in Gotham did lighten the load for Batman.  But the standout for me was Michael Caine.  He has brought more to the Alfred character then any other actor and his portrayal in “Rises” was heartbreaking and got me choked up a few times.  You finally see how much he cares about the Wayne family and their legacy to the city of Gotham.  Overall, the acting was as strong as you’re going to get from a comic book movie.

As far as Easter eggs go, there were quite a few that I thought worked very well.  The inclusion of Lazarus Pits were told in an interesting way with Bruce Wayne giving Selina Kyle the “Clean Slate” program, a practical way of explaining exactly what the Pits do.  Also, the little mention of “Killer Croc” by Blake was awesome and shows that the writers love to throw little bones to the comic fans.

Overall, the first true Batman trilogy was a complete success.  All three movies exuded different emotions, “Begins” with hope, “The Dark Knight” with apprehension, and “Rises” with dread, but the Scope of the movies grew and grew until Nolan had created a series of movies that will be held up as a litmus test for not just comic book films, but film in general.

Fun Fact:  “The Dark Knight Rises” has the biggest ensemble of Batman’s rogues gallery (not counting the Adam West “Batman”)  Bane, Catwoman, Killer Croc, Ra’s al Ghul, Scarecrow, Talia al Ghul are all seen or mentioned in the movie.  And I’d like to believe that Bane’s right-hand man who was an expert sniper is a nod to “Deadshot.”  Just saying.