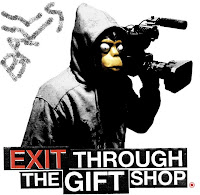 Exit Through the Gift Shop – Balls

I remember as a kid I would always see this tag all around my neighborhood “Kaos.”  I never really understood what it meant growing up and I would never know, it was just some graffiti on the wall, literally.  I’ve never been into the whole “street art” scene, in fact I’ve never really been into art at all, but when you think about what street artists do to get their point across, it takes a lot of balls to do some of the art you see in “Exit Through the Gift Shop.”

The guy with the biggest balls is Banksy, a London street artist who has “tagged” everything from retaining walls in the West Bank to Disneyland.  It’s really incredible that this guy isn’t locked under the jail, but he keeps calm and carries on.

Speaking of balls, Thierry Guetta, the main documentarian for which the film is based on, shows how art, in any form, is a truly backstabbing business where anything goes and you have to be in the right place at the right time and know how to co-opt a fad.

“Exit” has been accused of being a “fake” documentary, but that only adds to the mysticism of Banksy, Thierry, Shepard Fairey, and other artists shown in the film.

Fun fact:  The most expensive street art ever auctioned was Banksy’s “Keep It Spotless” which sold for $1.8M in 2008.