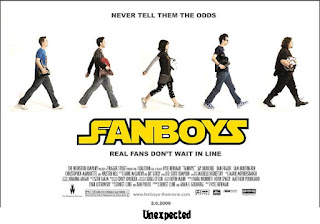 Fanboys – Unexpected
Let’s face it; the three prequel “Star Wars” movies were disasters.  Films that pandered to 11 and 12 year old kids that lacked heart, and acting for that matter, so it might behoove you to believe that a group of friends would actually go cross-country in order to steal a print of “The Phantom Menace” and risk everything for a friend’s dying wish.  Well, it happened in “Fanboys” and to be honest with you, I enjoyed
almost every minute of it.
“Fanboys” is one of those interesting movies that was filmed well before it was actually released in theaters (all 12 of them), and featured a lot talent (Seth Rogan, Kristen Bell, Danny McBride) before they really got big.  The film is fluff, but it’s the type of fluff that makes you feel good inside and the characters are fun enough that that you actually enjoy the adventure that they are taking you on.
It’s not a perfect movie, but if you enjoy adolescent hijinks in the vein of “Adventures in Babysitting” or “The Goonies” then “Fanboys” will be right up your geek alley.  Also, if you’d like to keep the good times rolling, check out ‘Ready, Player One” the first novel by “Fanboys” screenwriter, Ernest Cline, it’s one of the best things written in the past five years.
Fun Fact:  Kevin Smith was supposed to cameo as Harry Knowles of “Ain’t It Cool News” but had to bow out at the last minute.