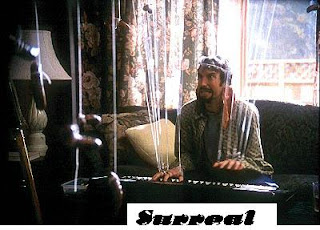 Freddy Got Fingered – Surreal
In the magical land of Canada there is a man who sucks cows’ nipples, torments complete strangers, and treats his friends like winners.  That man is Tom Green.  Back in the late 90s, MTV took a liking to this strange young man and gave him his own weekly show and soon enough old Greeny went Hollywood and birthed from his loins came “Freddy Got Fingered.”
A lot has been said about “Fingered” over the years; how awful, vile, deplorable, sick, the accolades can go on and on, but I have to say, without Tom Green and this oft-kilter comedy (I say it’s more performance art then actual comedy) you wouldn’t have your “Tim and Eric Awesome Show, Great Job” or “Workaholics” comedies that really pushes the limits of taste, and what we can take.

Heartwarming, and definitely fun for the entire family, “finger” it out and go check out “Freddy Got Fingered” you won’t regret what you’ll see.

Fun Fact:  The scene where Freddy is watching TV in his house are actual scenes from Tom Green’s surgery for Testicular Cancer