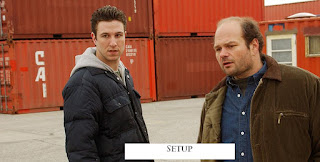 This is a disclaimer that I should have written in the review of “The Wire,” Season One, but I’ll write it here to preface my Season Two review.  I did not watch “The Wire” on a season to season basis, essentially because I didn’t have HBO at the time and I wasn’t about to shell out $60 bucks for each season on DVD, so I waited for the magic that is HBO GO and I got my kicks that way, (you might say to yourself, “Matt, you dummy, why didn’t you just torrent it or find a pirate site.”  Sorry guys, I actually like paying for my entertainment and have respect for the art so I pay for what I want, HA!).  I digress, this isn’t an ethics course, this is “The Wire” Season Two.

Every series needs to have a setup season, or a filler season if you will.  Season Two is just that for “The Wire”.  The seaport of West Baltimore is the primary setting for this season after we see several members of the Barksdale Crew put behind bars at the end of Season One.  While Avon Barksdale, Stringer Bell, and Omar Little are still major players in the grand scheme of things, they take a backseat of sorts to Frank Sobotka,  a stevedore union president trying to walk the line, and Proposition Joe, an East Baltimore drug kingpin with a connection to the mysterious “Greek” trying to sort out a truce with his West Baltimore rivals.

While I wouldn’t call this the strongest season in the series, it’s still vital as it sets up several characters for future seasons, and sets the tone for the remainder of the series.  You get a little deeper into the psyche of McNulty and his “thrist” for justice, the paranoia of Avon Barksdale, the aspirations of Stringer Bell, and how the government works in West Baltimore.

What you’ll notice in this season, and as the series continues, is the “offing” of several characters out of the blue.  It really becomes apparent that the creators of the show really wanted to show to audience that no one is safe in West Baltimore.  While I really don’t appreciate characters that I like coming to grisly ends, the fact that the showrunners have the balls to kill off anyone at any time in a small twisted way, pleases me.