Here in America many shows come and go. Out of probably thousands only a few are worth watching. Unlike In the UK, where there seems to be a lot more quality shows over quantity.

The Take well its a ton of goodness.

It’s simply one of the best dramas.

The Take is based off of the novel by Martina Cole. It’s first episode came on in 2009 on Sky1 in the UK. It’s about a gangster named Freddie (played by Tom Hardy) who leaves prison and is hoping to take over the empire of his boss, Ozzy (played by Brian Cox). It takes place in the 80’s which is always a great time period. I would love to talk about this show more but I don’t want to spoil anything.

So lets talk about this show’s stunning-fantastic performances. The standout is Tom Hardy who will blow you away. His acting is beyond top notch, it really is amazing. Just wait to you see his mannerisms!

The others, Shaun Evans, Kierston Wareing, Sara Stewart, Brian Cox and Charlotte Riley complete a perfect cast that you never get to see on TV, including movies. It’s really something. Brian Cox like always gives a good performance and always is great to see on film. A big surprise for me would be Charlotte Riley who’s strong performance is something to behold (by the way she is Tom’s girl in real life, he’s damn lucky, she’s beautiful and can act, a double threat that I would like to see more of.)

It’s supporting cast is outstanding. Freddie is a psychopath, there is killing, blood, a plot that keeps you going and great cinematography. What more could you ask for? This drama is one of the best you will ever see on TV. We need more of these to watch! Especially in the US. 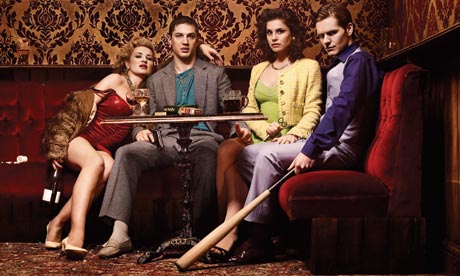 Tagline: He’s got family, he’s got power, but he’s got issues.