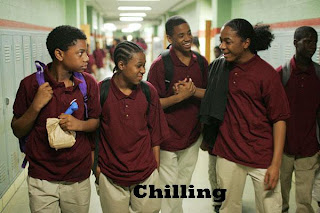 Through three seasons of “The Wire” we have gone from the streets, to the docks, and back to the streets so it was only natural that we visited somewhere that we would think would be safe and would give us a break from the chaos of West Baltimore.  Unfortunately, that isn’t the case when we visit the School District of West Baltimore in Season Four of “The Wire.”

So far we’ve seen junkies, gangsters, murderers, pimps, mobsters, crooked cops and politicians, and you can make the case that they’re all scourges, blights on society, but it’s all the more tragic when you see the neglect the school system faces and with the “robbing Peter to pay Paul” mindset you understand why West Baltimore is in such disrepair.

This season we meet more new characters and the re-invention of a few old ones.  The most prominent ones include Michael Lee, a street smart kid that catches the eye of the Stanfield Crew, Duquan Weems aka “Dukie”, and Randy Wagstaff, two extremely tragic figures of how the school system fails and bureaucracy blocks enhancement for West Baltimore’s youth, and we see the new career direction of former Detective Roland Pryzbylewski, now a math teacher for the West Baltimore School District.

As we have come to expect from “The Wire,” we have a fair share of “offings” of well liked characters, and some interesting twists from others.  I would have to say that Season Four is the strongest season of “The Wire” so far as it keeps close to the streets but it also explores the failures of the local government, how criminals take advantage of the local youth, and why hope in a hopeless situation is so dangerous.

Fun Fact:  Felicia Pearson, who portrays Felicia “Snoop” Pearson, is an actual convicted felon from East Baltimore who was discovered by Michael Williams, who portrays Omar Little in “The Wire”.

Snow White And The Huntsman