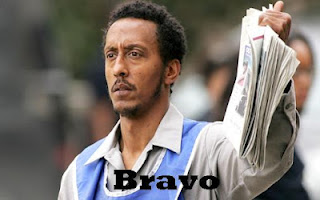 After watching four seasons of “The Wire” in about the span of three weeks not only was I heavily invested with what would happen to the Barksdale Crew, Jimmy McNulty, Bunk Moreland, the New Day Co-Op, and Omar Little, but I was getting mentally exhausted.  All the shows run a full hour (more on the season openers and finales) and the show-runners pack so much in each episode that I hit information overload at certain points.  However, regardless of how much is is crammed into each show, I couldn’t get enough and needed closure, and I really wanted some good to come out of the whole shitty mess that is West Baltimore (I got some, but I mostly got kicked in the nuts).  This brings me to Season Five of “The Wire,” the final season, and an excellent conclusion to a series that you could call “The Standard for all crime dramas.”

Released in 2008, (season four finished up in 2006, so for those who were watching season-to-season, there was almost a 14 month waiting period between the end of four and the start of five) we shift to the magical land of journalism and the offices of the Baltimore Sun.  As in real life, the written word is on the ropes and newspapers are slowly becoming obsolete so writers are becoming more desperate and trying anything to cling onto their jobs, similar to the drug trade in Baltimore, which is shrinking as crews are falling and the Stanfield Crew has monopolized the market.  Desperation is a major theme for this fifth season as McNulty starts a new “crusade” to finally put an end to Marlo Stanfield’s crew, newly-elected Mayor, Tommy Carcetti, wants a “serial killer” who is targeting the homeless caught, and the clock is ticking as job cuts at the Baltimore Sun are starting to affecting employee morale.  If people weren’t desperate in Baltimore before, they certainly are now.

The one gripe I could find with this season are how the plot lines are tied up. You could tell that HBO was ready for the show to end (not because the show was bad, but when it comes to business, its all about ratings, and during the original run of the show the ratings were lacking), and the plot lines had to be cleaned up as best they could.  Season Five was also the shortest season (ten episodes).  However, I will say everything came to a satisfying end and watching the ending montage made me feel happy, mad, frustrated, hopeful, but most of all, in awe.

Watching “The Wire” made me realize that TV isn’t dead.  To be honest with you, it took me watching this show to really get back into watching TV and wanting to see if I could find something that could really top “The Wire.”  There are a few shows (funny enough, most of them are on HBO) that can really hang, but I will include “Justified” and “The Shield” in that grouping (funny enough, both on FX), but I think I’ll be hard-pressed to find another show on TV that really gave me everything I wanted (and ironically, didn’t want) from a TV show.  “The Wire”……bravo……