The case is closed on “The Wire.”  Some of the good guys won, some of the bad guys won, and there were plenty of people caught in the cross-fire, but it was a ride that everyone should be willing to take if you enjoy story and character-driven dramas. 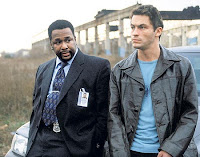 10.  Det. Roland “Prez” Pryzbylewski:  The funny thing about Prez is that he went from an asshole detective who was messing up left and right to someone who I truly respected come the end of the show.  Once he started his new career as a middle school teacher, the character became a tragic reminder of someone who continues to have hope in a hopeless situation.

9.  Dennis “Cutty” Wise:  Cutty, a former Barksdale enforcer, has been recently paroled when we first meet him.  He tries to get back into the drug game when he leaves prison but realizes that the life isn’t meant for him anymore and decides to open a boxing gym for the troubled youth of West Baltimore.  He is one of the lone bright spots in the show as he not only saves his own life, but indirectly saves the life of Namon Brice, the son of incarcerated Barksdale enforcer, Roland “Wee-Bey” Brice.

8.  Brother Mouzone:  While he only appeared in a few episodes, the suit, glasses and bow-tie of Brother Mouzone left a lasting impression.  Essentially Mouzone was a mirror image of Omar Little, only Brother wore a smart suit and sported a pistol while Omar preferred a brown duster and a shotgun.  The duo also supplied one of the more surprising deaths in the series when they gunned down Stringer Bell at the end of Season Three.
—————————————————————————————————————
Omar Little: “I knew you’d come back.”
Brother Mouzone:  “I trust you didn’t lose much sleep over it?”
Omar Little:  “Worryin’ about you would be like worryin’ if the sun gonna come up.”
-Season Three
—————————————————————————————————————
7.  Michael Lee:  During Season Four we were introduced to the youth of West Baltimore and the one character that really stood out from the rest of the pack was Michael.  From a broken home, Michael tried his best to walk the line between right and wrong while trying to protect his friends and his younger brother, Bug.  In the most poignant moment of Season Five, Michael, now on the run from Marlow, Chris, and Snoop, has to say goodbye to both his friend Duquan and Bug and disappear from Baltimore.

6.  Chris and Snoop:  I consider both Chris Partlow and Snoop pretty much the same character, just one male and one female.  They are both extremely loyal, and similar to Omar and Brother Mouzone, they both have a “code.”  Chris is the more calculating of the two, and while it’s not said directly, seems to be a victim of childhood abuse.  Snoop is the colder of the two and would do anything to protect the reputation of Marlo Stanfield.

5.  Reginald “Bubbles” Cousins:  With a show so grim, it was great to see how one character in particular went from a hopeless drug addict to a reformed member of society.  That character was Bubbles, a police informant, heroin addict, and just maybe, the lone bright spot on “The Wire.”  In the series finale, Bubbles finally opens up at an NA Meeting about losing a friend, and it always brings a tear to my eye.  It’s truly a beautiful moment in the series.
————————————————————————————————————–
Bubbles: “Ain’t no shame in holdin’ on to grief.  As long as you make room for other things too.”
-Season Five
————————————————————————————————————————————
4.  Russell “Stringer” Bell:  If anyone knows anything about “The Wire” you know Stringer Bell, portrayed by Idris Elba.  Stringer was the brains, while Avon was the brawn of the Barksdale Crew, and when Avon went away to prison he took over the crew and tried to steer them in a different direction.  Unfortunately, Stringer thought that drug dealers could be rationalized with and “trained” but the one thing he forgot about was the fact that he was still a drug dealer trying to move past his station in life, and that is pretty much what finished him off in the game.

3.  Marlo Stanfield:  Marlo was a different breed of drug dealer then what we had seen from Avon Barksdale, Stringer Bell, or Proposition Joe.  He was ruthless, had enforcers that would do all of his bidding, and he got to the kids early, looking for the next generation of hopper even in middle school.  But not even money mattered in the grand scheme for him, it was knowing that people feared him.

It is difficult to pick just ten characters as the best of the bunch on “The Wire” because they are all so damn good.  Moving on to the tragic/offing moments.

*Warning, there will be spoilers ahead*

10.Chris and Snoop torturing and killing Butchie for information on Omar.
9.  Seeing Duquan succumb to drugs.
8.  Bodie being gunned down by the Stanfield Crew while defending his corner.
7.  The death of Wallace by Bodie and Poot.
6.  Cheese being shot and killed by “Slim” Charles.  Probably the most “satisfying” death in the entire series.
5.  Frank Sobotka murdered by “The Greek”
4.  Stringer Bell gunned down by Brother Mouzone and Omar in his own building.
3.  Michael saying goodbye to Duquan and Bug
2.  Seeing Bubbles’ revenge plan backfire and kill Sherrod.
1.  Omar being gunned down by Kenard.

The Cabin in the Woods