The Cabin in the Woods – Tribute 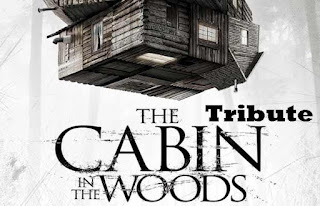 *There could be some spoilers in the links, so tread with care*

The 2012 Summer movie season is over and I saw all the big ones; The Avengers, The Dark Knight Rises, Amazing Spider-Man (even though some people wouldn’t agree that Spidey was a “big” Summer movie) and Prometheus.  Sure, you had The Bourne Legacy and a few other hyped movies, but my best experience came before Summer even started when “The Cabin in the Woods” FINALLY was unleashed to unsuspecting audiences in April.

Love letters are always nice when you get them from people that mean it, and people like Joss Whedon and Drew Goddard must really have a crush on me.  I feel like a mobster in “Goodfellas” and this is their Tribute to not only me, but everything they love as well.

The premise is simple; five stereotypes (including the nerd, jock, and stoner) are headed for a secluded cabin, are menaced by a “prophet of doom” and are attacked by monsters.  Like I said, simple…….WRONG.  Contrary to what people might think, this is a very self-aware tribute to genre films, and it’s pulled off perfectly.

Due to this movie being delayed, its a tad funny to see Chris Hemsworth, you might have seen him in a few low-budget movies like “Thor” and “The Avengers,” in one of his first roles.  You also get a few Whedon favorites like Amy Acker (Dollhouse) and Tom Lenk (Buffy and Angel)

Sprinkle some Evil Dead, a dash of Lovecraft, a sprinkle of ’50s giant monster movies, and good dose of splatter/slasher films, and you have “The Cabin in the Woods.”  This is definitely a trip you’d like to take, sure, you might end up tied up, gagged, and set on fire by people in white cherub masks, but at least you’ll finally be able to see the “merman“