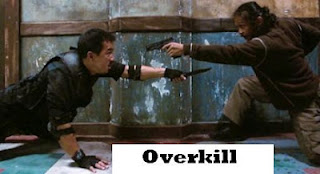 The days are pretty much over where you get old-school action movies that say “Screw the story, we don’t need a plot, let’s just kick people in the face, shoot them in the head, and break necks!”  Sure, we have “The Expendables” but there hasn’t been a good foreign action flick in quite a while…..OW!!!…..geez…..sorry, I just got kicked in the face by “The Raid: Redemption.”

The premise is simple; an elite group of Indonesian cops are sent to a building in the slums of Jakarta where a vicious drug dealer resides and shit hits the fan, and by shit hitting the fan I mean, in honor of Joe Bob Briggs, Glock-fu, Baton-fu, Army Knife-fu, sniper rifle-fu, fluorescent light-fu, machete-fu, and hammer-fu.  The action is non-stop, except when the director decides to slow things down and try and incorporate an extremely thin plot.  Just throwing it out there but the director, Gareth Evans, is also Welsh (take that for what its worth).

The fight choreography is great (the film uses Pencak Silat as the main fighting technique).  Yayan Ruhian, who portrays “Mad Dog,” acts as the choreographer of all the fights in the film and there are plenty of “Oh Shit!” moments.  The one issue I do have is the liberal use of CG blood.  It’s not as bad as some movies (The Devil’s Rejects comes to mind) and its hidden pretty well, but it does show up from time to time.

All in all, “The Raid: Redemption” is a fine “film” and an excellent exercise in the resurrection of the modern kung-fu movie…….owwwww……stop kicking my face!!!

Fun Fact:  The roots of the martial art Pencak Silat can be traced back to Java and Sumatra in the 7th Century.