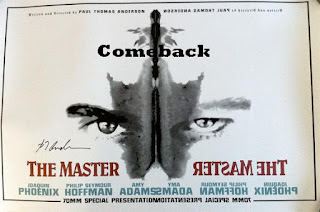 In case you haven’t heard, both Paul Thomas Anderson (or P.T. Anderson for the mod set) and Joaquin Phoenix are back.  For Anderson this is his first film since “There Will Be Blood” in 2008, and for Phoenix, well, he started a rap career and “documented” himself in 2010’s “I’m Still Here” with the help of Casey Affleck, but this is his first “film” since 2008, where he appeared in “Two Lovers” (?)  But forget about the past, let’s discuss “The Master”, simply.

The basic idea of “The Master” is control and fervent belief.  The setting is just right (the film spans approximately from 1942-1950), and it makes complete sense.  After World War II, and the pre-Red Scare era, many people were looking for guidance and someone to believe in, and Lancaster Dodd (played brilliantly by Philip Seymour Hoffman, who is probably on his way to another Oscar) is that man.  He takes in a disturbed Naval vet, played by Joaquin Phoenix (who WILL win the Oscar this year) as his protege, while Dodd’s son has become suspect of his father’s practices and teachings to his followers.

The film also stars Amy Adams as Dodd’s wife, and Rami Malek as Clark, Dodd’s new son-in law, who looks shockingly like Bruno Mars.  But this film is all about Phoenix, who gives the performance of his life, and I really didn’t think he had it in him.  Sure, he was great in “Gladiator” and “Walk the Line” but to create a character like Freddie Quell from the ground up is something to behold.  This is his comeback.

While movies by Anderson (“Boogie Nights” and “Punch Drunk Love”) have always been critically acclaimed they all seem to have a veil of inaccessibility and being a little too art house.  But do yourself a favor, if you like film and really enjoy acting, “The Master” is top-notch in all aspects, and hey, making fun of Scientology and cults is fun.

Fact Fact:  This is the fifth collaboration between Anderson and Hoffman, starting with “Hard Eight” in 1996.