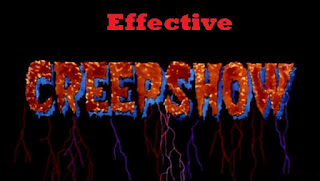 *Let me preface before I get into the actual review.  The next 31 reviews will not be in any discernible order, they will simply be 31 horror/suspense/thriller movies that I enjoy and I think deserve to be reviewed.*

October is here and that means horror, horror, and more horror, and no Marlo Brando isn’t invited.  As a kid growing up I always looked forward to October for all the horror movie marathons and the “money shot(s)” at the end was Halloween, free candy, go home and sort the candy, eat some candy, and watch more horror movies.  One of the earliest horror movies I remember, and remember scaring the living shit out of me, was the Stephen King/George Romero collaboration from 1982, “Creepshow.”

Before “Creepshow” there were several horror anthologies including “Tales From the Crypt” (not that one, this one), “The House that Dripped Blood” in 1970 and “Trilogy of Terror” in 1975.  While these were all well and good, they lacked the blood-spilling, gut-wrenching horror that I desired, that is why “Creepshow” holds such a special place in my heart.

As with many anthologies, the premise is simple; there are anywhere from three to five stories with a wrap around that either begins and ends the film, and/or is used as a buffer in-between each story.  “Creepshow” features five stories ranging from zombies, plant growth that takes over the world, a monster in a crate, and of course, roaches.  There are highs and lows in the storytelling with the third story “Something to Tide You Over” being the weakest and the fourth story, “The Crate” being the standout, not just from a gore perspective, but also having the strongest characters/actors, including Adrienne Barbeau as a nagging drunk of a wife and Hal Holbrook as her long suffering husband.  The premise is simple, yet effective, just like the entire movie.

Other standouts include the creature effects, all done by Tom Savini.  You might know him from a few things, as well as the score by John Harrison, which is tits, the highlight being the main theme for “The Crate” segment.

I might be as bold as calling “Creepshow” one of my favorite horror movies of all time because it made such an impression on me as a kid, and its an old standby that I keep coming back to every Halloween season.