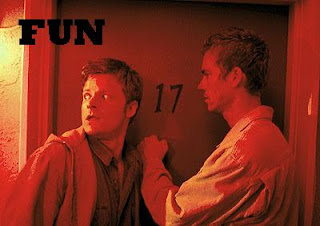 Now for something completely different.  Some people say that imitation is the most sincere form of flattery, and when it works, it works really well (I made up the last part, but you get the point).  Let’s face it as well, the horror genre really hasn’t had an original idea in years, and don’t give me “torture porn” as an example, or any of this “Paranormal Activity” bullshit.  And while I do enjoy a bloody gore fest, I also appreciate something with a little more subtlety, and that could be the reason why I enjoy “Joy Ride” from 2001 so much.

I’ll say this about “Joy Ride” before i get started; the movie takes a lot from other movies.  It has bits of “Duel,” “The Hitcher,” and hints of classic road movies like “Midnight Run” perhaps, but even with all of those homages, the film works and doesn’t feel stale.

“Joy Ride” stars Paul Walker, Steve Zahn, and Leelee Sobieski as three friends on a road trip before they meet the ire of a spurned trucker out for blood.  The premise is simple, but the fact that there is real acting in the film helps, not to mention the chemistry between Walker and Zahn is fun to watch.  Sobieski is fine as essentially the damsel in distress (and a great Helen Hunt look-a-like), and the eerie voice of Ted Levine as “Rusty Nail” really works, mainly because you can’t help thinking about this.

The direction is atmospheric by John Dahl, and the writing by J.J. Abrams, pre-Lost, is well-crafted and doesn’t feel forced or awkward, as is a symptom in genre films.

Overall, it’s worth buying the ticket for this “Joy Ride” as there is plenty of suspense, horror, and a lot of fun.

Fun Fact:  The “CB” in the CB Radio stands for Citizens Band.