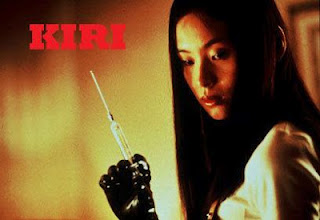 Asians, specifically Japanese folk, have given us plenty to be happy about.  Playstation, Nintendo, Karaoke, Anime, Godzilla, and of course giggling Japanese school girls.  But the hell with that!  I’m talking about hardcore, blood-soaked, WTF, mind imprinting moments of sheer horror, and one person has been giving Westerners nightmares for quite sometime; give a round of applause for Mr. Takashi Miike-san and his magnum opus, 1999’s “Audition.”

Apparently love stories in Japan are totally fu*cked, but on the surface “Audition” is a classic, where a lonely widower is looking for love in what ends up to be all the wrong places.  The lesson(s) to be learned from this film would be to never trust an overzealous friend who encourages you to meet women by way of a fake TV/film audition and choosing the one girl who A) was a former dancer B) waits by the phone for your call C) worked in a bar where people go missing and D) has an acupuncture/piano wire fetish and loves to whisper “kiri, kiri, kiri“.  These are the A,B,C (and D’s) of leading a happy, productive, and not-missing-your-feet life in Japan.

“Audition” is well paced, and has a solid narrative throughout, with good acting (I’m sure it would be better if I understood Japanese). The final, grueling, 30 minutes is an exercise in horror, suspense, and mind-fuckery at its very best.  Miike knows how to pull out all the stops and create an atmosphere of dread and hopelessness where the audience doesn’t know where, or when, he will stop and give a breather.  It’s an art that is lost upon the modern horror director and in my opinion hasn’t really been seen since Alfred Hitchcock.

So if you’ve just gotten out of a relationship, or maybe are about to go out on the town with your finest Affliction glitter-tee, destroyed denim, and are going to fist-pump your way into the heart of the girl at the bar drinking the cranberry juice who volunteered as the designated driver, think about this;  you might be the one in the burlap sack slurping up vomit from a dog bowl.  Do yourself a favor, check out “Audition.”