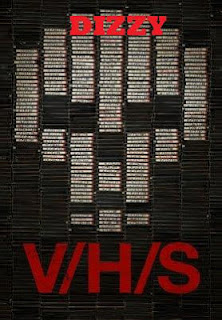 Between you and me, I’m sick of found footage films. It all started with “The Blair Witch Project,” which, yes, was a very cool idea, and the fact that everyone bought into the fact that this really happened to three kids in the woods was amazingly effective, and in turn it still stands as one of the most successful independent films of all time.  We’ve come a long (annoying) way from 1999, where it’s now chic to make every film, and even TV (see the failed ABC experiment “The River”), another found footage vehicle.  First we had the torture porn phase, and we have transitioned to everything found footage, and horror auteurs wonder why people won’t take the genre seriously anymore.  I know, this seems like a rant, well I’m done, but I do believe in the thought that if you’re going to do something that everyone else is doing you might as well make it good (sorry “Paranormal Activity” you’ve run your course).  This brings me to 2012’s “V/H/S” and a slight ray of hope for the horror genre.

The premise is simple; five stories and one wrap-around that runs the gamut of zombies, haunted houses, aliens, and psycho killers.  But I will admit, within the first three minutes, I was feeling dizzy.  The camera just moves and moves and moves and moves.  Warning to any viewer who might be sensitive to motion sickness, this film will mess you up.

Aside from the camera work, the stories are actually well constructed and fairly original.  The highlights to me include the first story “Amateur Night” where some raucous party-goers looking for the old “in-out, in-out” run into the proverbial “quiet girl,” and the last tale “October 31, 1998,” directed by the film collective Radio Silence, create a haunted house tale with a twist.  I can find something I liked in all the stories, but these two were the standouts.

Is “V/H/S” re-inventing the wheel….no, but it is a fresh look on the found footage genre that has been bogging down horror movies for the past few years.  I’m all for independent spirit, especially when it comes to horror films, and the guys behind “V/H/S” have a bright future as long as they build on their success with “V/H/S,” buck the found footage trend, and lead the genre into a renaissance.

31 Nights Of Halloween, Let Me In