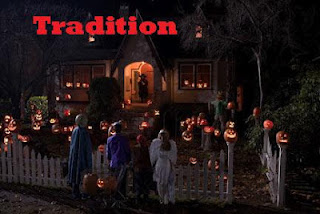 I know, I’m an anthology whore.  It started when I first got the box set for “Scary Stories to Tell in the Dark.”  Reading those stories had a profound affect on me and how I saw and understood horror in general.  I still go back to those books every once in a while and re-live the good old days.  What can I say, I love short horror stories, and it works perfectly for the horror genre.  You really don’t see drama or action anthologies, it just fits with horror.   From “Creepshow” to the under appreciated “John Carpenter’s Body Bags” it had been a while since a reputable horror anthology had come out, until “Trick r Treat” was finally released, on DVD in 2009.

I say finally because the film was a wrap in 2007 and it showed up at a few film festivals, however, Warner Bros. had no idea what to do with the movie for two years, kind of like MGM with “The Cabin in the Woods.”  The travesty is that “Trick r Treat”never made it to the theaters, where I think it would have made a killing with audiences. But it did finally see the light of day in 2009 when it was released on DVD, and the cult following started from there. The movie has some credentials; it was directed by Michael Dougherty, who wrote the excellent “X2” and the sub-par “Superman Returns,” was produced by Bryan Singer, and we all know what he’s known for, and stars the likes of Brian Cox, pre-Sookie Anna Paquin, and the underrated Dylan Baker.

“Trick r Trick” is more so the “Pulp Fiction” of horror movies since the stories are interwoven as opposed to the separate stories with a wrap around formula, giving the film some teeth, and making it more thoughtful than your average horror fare.  The basic idea of “Trick r Treat” revolves around Halloween tradition and mythology while introducing the audience to a brand new Halloween mascot “Sam.”  He is the one constant in all the segments and, in my book, the most recognizable horror icon since Freddy Krueger (sorry “Saw” fans, Jigsaw doesn’t really rank up there for me).

The acting is solid, it has great atmosphere and, for my money, should become a Halloween movie tradition right up there with “Halloween” and “Creepshow.”  “Trick r Treat” is tons of fun, without all the filler, and with the right distributor (I’m looking at you Lionsgate) could turn into a yearly (clever) Halloween franchise.

Fun Fact:  “Trick r Treat” is based on a cartoon short created by Dougherty called “Season’s Greetings” from 1996.

31 Nights of Halloween, Tales From the Crypt Presents: Demon Knight