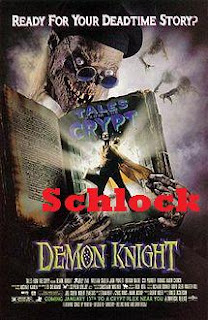 There is nothing wrong with schlock horror, especially when its well made schlock horror.  The schlockiest of schlock was back in the late-80s when “Tales From the Crypt” premiered on HBO, modeled after the controversial comic books from the 1950s.  There really isn’t a need to get into “Tales” right now because I’m sure I’ll talk more about it down the line.  In the meantime, let’s keep the good times going on the “31 Nights of Halloween” with “Tales From the Crypt Presents: Demon Knight” from 1995.

By the time 1995 rolled around the final season of “Tales” had already ended (sadly) but HBO still had a relatively lucrative property, so the most logical step for the series had to be a movie; and thus “Demon Knight” was born.  “Knight” borrows a lot from other splatter films, and the creature designs have a “Evil Dead” “Hellraiser” and “From Dusk Till Dawn” influence all over them, (“Dawn” came out a year later in 1996).

The film takes place in the fictitious Wormwood, New Mexico where a mysterious drifter named Brayker, played by William Sadler, is on the run from a mysterious collector, played by Billy Zane.  Without giving anything away, Brayker is forced to band together with a group of misfits in a church-turned-boarding house against a demon horde looking to obtain a mysterious key filled with blood (there is a lot of mystery in this movie as you can tell).

All in all, “Demon Knight” is a crap ton of schlock, but fun schlock.  It has chills, spills, thrills, and a ton of blood.  Zane is a standout as “The Collector” and eats up all of his scenes, and the rest of the cast hold their own, including a young(er) Thomas Haden Church, and Jada Pinkett.before she added the Smith.

The shlock factor is in full effect for the entire movie, and actors are hamming it up, but it makes the movie fun and moves swiftly without getting bogged down in too much exposition (it’s there, but it doesn’t dampen the tone).  There’s no reason not to check “Demon Knight.” It’s good clean, bald Billy Zane, fun.