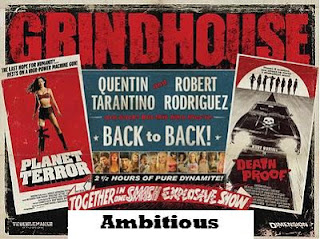 Here’s the problem with kids these days; they don’t appreciate shit!  I’m an old-school type of guy (and if I’m already a curmudgeon at age 28, well, you know what you can do), that’s why I hate crap like “Twilight”and any other abomination that co-ops things that were once bad-ass and turns them into little emo-bitches who sparkle, or shoe-gaze for over two hours.  Has any “scene kid”or emo kid seen “Dracula” from 1931 or maybe even “The Wolf Man” from 1941 (once again dating myself).  If Lon Chaney, Jr. or Bela Lugosi were alive to see what had become of their beloved characters, well, I’m sure Lugosi would get hooked back on morphine and Chaney would gladly take a few silver bullets to the heart.  I’ll give you this, if you’ve seen “The Lost Boys” I’ll give you a bye….but that’s it.

By the way, this review isn’t even about werewolves (well kind of) or vampires, I simply had to get that off my chest.  However, there is something special about taking something old and making it new again.  Take 2007’s “Grindhouse,” the two-movies-in-one masterpiece by Robert Rodriguez and Quentin Tarantino.

“Grindhouse” while fantastic, was a flop, and to me, that’s frustrating.  People, and unfortunately the studios, either prefer shitty remakes (there are a few exceptions) or…….gulp……PG-13 horror (and shame on you if you dare defend PG-13 horror).  Rodriguez and Tarantino gave a big “F You” as they usually do, and decided to dig up old exploitation movies from the 1960s and 70s and make a three-hour epic of sleaze, blood, guts, sex, and even more sleaze.  Throw in some fake trailers, done by the likes of Edgar Wright, Rob Zombie, and Eli Roth, and you have something special.  Too bad people have the attention spans of circus fleas because I would love to see more films like “Grindhouse” make a comeback.

The first film, “Planet Terror” directed by Rodriguez, deals with, SICKOS, not zombies, but SICKOS, kind of like psychos, but instead they eat flesh and their balls melt.  Here are the major plot points; there is a chemical weapon unleashed, people get sick and start eating and killing each other, there’s a government conspiracy, a stripper loses her leg and has a gun reattached to the stub, and we have some “From Dusk Till Dawn” references.  Simple, right?  Yeah, it is.

The second film, “Death Proof” directed by Tarantino, is a take on the slasher genre which stars the awesome Kurt Russell as “Stuntman” Mike who kills young women with his “death proof” stunt car.  People say this is the weaker of the two films, but I highly disagree.  While it might not pack in as much action as “Planet Terror” the dialogue is good, acting solid, and like I said before, it has Kurt Russell.  What else do you need?

Rodriguez and Tarantino go back to basics for “Grindhouse” and it works so well.  It’s simple, stupid fun that is lost upon the modern horror audience.  Not everything has to be a love story between Kristen Stewart, a vampire, and a werewolf.  Or a ghost story shot with a shaky camera.  Or…….”The Wicker Man.”  Maybe that was too easy, but I will give Nick Cage props for this.

If you haven’t already, please check out “Grindhouse,” it’s so good, it’s scary.

31 Nights of Halloween, Tales From the Crypt Presents: Demon Knight