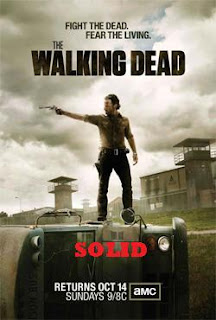 It’s about damn time AMC gave “The Walking Dead” the money it deserves.  Listen, I know that people love “Mad Men” and “Breaking Bad,” I understand that, but out of the big three shows on AMC the last few years, “The Walking Dead” really got the shaft.  Season two came out of the gates strong, whimpered in the middle, and after AMC found some money to throw at “Dead,” it ended with a bang, literally.  If the first episode of Season Three, entitled “Seed,” is any inclination of what is in store for our survivors, I’d say this is a solid start.

*Keep this in mind while reading further; there might be a few spoilers from last season so if you’re new to “The Walking Dead” I would advise watching the previous two seasons.*

When we last saw our survivors the farm had burned down, Andrea was separated from the group, Rick got the pleasant news that Lori’s baby wasn’t his, and the rest of the group had found out that they were all infected with the “Walker Virus.”  Just another day in the zombie apocalypse.  We pick up roughly six months later with everyone grizzlier, Lori looking a little more pregnant, and Carl looking way older.  The one thing I found interesting, and real cool, was that no one spoke in the first five minutes of the show before the opening credits.  It shows what the group has been through and one of two things; there is a lot of resentment towards Rick after his bombshell at the end of Season Two, or the group knows what it needs to do and verbal communication has gone out of the window.  It was a nice touch and not something you see too often in character-heavy dramas.

This episode is probably one of the goriest episodes to date, with a ton of zombies meeting their demises, again, and a shocker of an ending that I won’t spoil, but I’m sure those who have read the comics (I’m not one of them) might have an idea, but apparently it deviates (cryptic, huh?)

Overall,  this was a solid episode, and it’s certainly planting the “Seed” for things to come.  What will happen to Lori’s baby (zombie baby), what will become of Herschel, who are the armless, jaw-less zombies on a leash, and so much more.