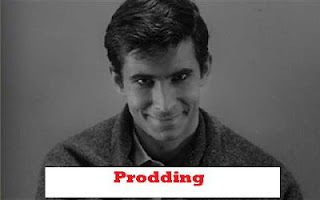 Slasher films have been around for a loooooong time, and have had plenty of ups and downs.  Take “Halloween” for instance, it pretty much invented “the formula.” Then you have “Friday the 13th” that perfected “the formula.” After that you had plenty of other slasher fodder, including any holiday being translated into slasher fare.  Let me illustrate.

I digress, I’ll continue this rant in another review, but it does bring me to a point; recent slasher films (and I use that term loosely) are awful.  There is nothing iconic about the sub-genre anymore.  Gone are the days of Michael Myers, Jason Vorhees, and Leatherface.  However, it does bring me to the most recent review on the “31 Nights of Halloween” and that is Alfred Hitchcock’s proto-slasher film, 1960’s “Psycho.”

You might think that I’m going to laud “Psycho”and say how great a film it is, well, it’s just okay.  While there are many redeeming aspects, namely the cinematography, music, and the balls Hitchcock had (spoiler alert, c’mon this is a 50 year old movie) to kill off his star, Janet Leigh, “Psycho”doesn’t hold up as well as some people think, and watching it again as an adult with more of a appreciation of the genre and film in general; it’s prodding.

Maybe I’m committing blasphemy (I must be, because there is nothing negative out there about this film).  I’ve besmirched the greatness that is Alfred Hitchcock, The Master of Suspense.  Sorry Alfie, no hard feelings I hope, but “Psycho”just seems antiquated in this day and age.  It’s almost a procedural serial killer/cop drama, which wouldn’t work for the genre today.

“Psycho,” based on Robert Bloch’s novel of the same name, and loosely on 1950’s serial killer, Ed Gein, is about Marion Crane (Janet Leigh), whose on the run with $40,000, and finds her way to the Bates Hotel, run by Norman Bates (Anthony Perkins) and his domineering mother.  Crane is soon murdered by what seems to be a woman while taking the most famous shower in cinema history.  Bates finds the body, and disposes of both it and Crane’s car.  Worried about her sister, Lila Crane (Vera Miles) hires private detective, Milton Aborgast (Martin Balsam), to track down her sister.  The P.I. meets a grisly fate at the hands of the same woman that murdered Marion.  Hearing nothing from their detective, Lila and Marion’s lover, Sam Loomis (John Gavin), take matters into their own hands and head to the Bates Hotel. Lila, while investigating the Bates’ residence, stumbles upon the basement revealing the skeletal remains of what seems to be Norman Bates’ mother, revealing the twist that Bates was actually acting as his mother, thus committing the murders of both Marion and Aborgast.

When you break the movie down that way it sounds great; simple, effective, and trendsetting.  No one had seen that level of violence from a mainstream film, especially one done by Hitchcock.  The problem with “Psycho” is the pacing.  The interactions between characters seems forced (granted, I’m looking at this from a 2012 perspective as opposed to the 1960s) and it takes a while to move the story along.  I understand that is the point of a suspense film, but “Psycho” comes off as more of a noir, and when you think about it in that sense, it’s an excellent study in noir film making.

What drives “Psycho” lies in the director and the composer.  Hitchcock brings an eeriness unlike any film before it and Bernard Herrmann’s score brings a sense of dread in every scene, and “the shower scene” speaks for itself.

The point I’m trying to get at is this; would “Psycho” make it in today’s horror market?  No, and the proof of that is the 1998 remake.  It’s the same exact movie, only with different actors and in color.  If it didn’t work then, it won’t work now.  You also have to take into account what movies studios are pitching; found footage films.  You might say, “Hey Matt, you just watched “V/H/S” and you said you liked it?!”  Yes, I did enjoy “V/H/S”, but when it comes to the horror genre that’s all you’re going to get.  That, and another “Final Destination” and something else that has something to do with demonic possession.  No matter how bad the film is, people will eat it up, and a relatively smart film like “Psycho” wouldn’t stand a chance.

“Psycho” is a film that you can call timeless in it’s direction, tone, and music, but the way the story is constructed and once the twist ending is out there is little replay value from a shock standpoint.  If you want an education in film study, sure, “Psycho” is great, but it’s a time capsule film what worked then, but doesn’t really work now.