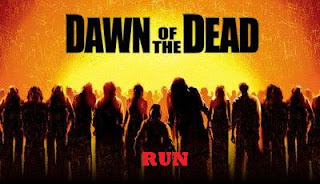 The bane of the horror genre for the past decade has been the remake.  Hollywood has gotten so lazy and they’ve treated the horror genre like a dumping ground for bad updates on generally good horror fare.  I understand the point; horror is cheap for a studio to produce, they can introduce fresh new actors (namely females that will bring in the male audience) and generally, they will at least break even no matter how bad the film.  Not to say there aren’t exceptions to the rule, and 2004’s “Dawn of the Dead” remake is an example of a horror remake gone right.

Before I go into the actually movie I’m going to say this:  I do not like Zack Snyder.  I’m not really impressed by his body of work, and I think he bites off too much, thus, his work suffers.  That is the problem with “visionary” directors like Snyder.  Take “Dawn of the Dead” and compare it to something like “Sucker Punch.”  “Dawn” is great because the concept is simple, effective, and done very well (while I may not agree with everything in it, but I’ll get to that later).  “Punch” was for prepubescent boys, and it included girls in cosplay costumes, a paper-thin plot, and a severe case of style over substance.  I understand this is his style, but when big ideas are only half-realized its hard to take him serious as a director when I’m taking him as a one trick pony.

While I don’t really enjoy Snyder’s other films (see above), I did enjoy “Dawn of the Dead.”  While on the surface it’s a remake, there are things that are done well, and other things that tweak me.

The premise is the same as the George A Romero’s original; The zombie apocalypse is in full swing and a small group of survivors head to the mall to buy some Dockers and make their stand.  While the mall provides the group with everything they need, from food to recreation, they begin feeling trapped by the zombies outside the mall hungry for their flesh.  As its been told over and over, ad nauseam, the film’s setting, a mall, along with the zombie invasion, is an allegory for consumerism and how we, the “zombified” public, feel the need to endlessly consume and spend.  While Snyder’s remake does have a mall where survivors are holed up, the meaning behind the film is lost and is essentially a zombie action film.

What Snyder does right is pay homage, in part, to some of the original actors.  Both Ken Foree and Tom Savini have fun cameos as a preacher and a sheriff, respectively.  He also, as opposed to his other films, keeps the slow-motion to a minimum and tries to flesh out his characters with somewhat of a back story.  The actors look like they are having a good time, and while cheesy at times, the acting is solid for a horror film.  As a Troma fan, I also appreciate the fact that James Gunn wrote the original script of “Dead.”  An independent dude makes good.  Now, let me explain why run is the word of the day.

What I can’t get behind, and the problem I’ve always had was this……the running zombie.  Oy vey!  I’m a purist first of all, zombies are shamblers, walkers, they might have a little giddy-up, but they are not sprinters.  When you die you develop rigor mortis brain/body decay, which would have a major effect on the way that you move and react.

I’ll also say this; I love “28 Days Later.”  There is an explanation why those “zombies” run.  They aren’t zombies!  They don’t die, re-animate, and come looking to eat your brains, this is because they are infected with a virus (a rage virus to be exact).  If you’re going to be the “living dead” you shouldn’t be able to run, its physiologically impossible.

For as much of a problem that I have with the running zombies, I enjoy “Dead” very much, it’s just the little quirks that stop me from saying this remake is better than the original.  It appeals to the ADD crowd with running zombies, slow-motion, quick cuts, and isolates the purists a bit, but overall, Snyder creates a neo-zombie film that gives the audiences everything they want; hardcore zombie gore, boobs (a little), and intense action.  Zack Snyder’s “Dawn of the Dead” is worthy of your time.

Fun Fact:  While the original “Dead” took place in the greater Philadelphia/Pittsburgh area, the remake takes place in Milwaukee, WI.

31 Nights Of Halloween, The Exorcism Of Emily Rose