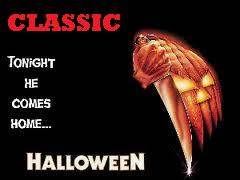 Thinking about the history of horror films there have been five distinct eras that I can think of; The early 1900s brought us the classic monsters like Dracula and Frankenstein.  Post World War II films brought us atomic age monsters that ranged from giant ants to komodo dragons.  The Vietnam War introduced zombies and class war horror.  The late 1970s started the slasher trend, and most recently (from about 1999 to now) we’ve had an epidemic of remakes, torture porn, and found footage.  While I appreciate all eras for what they’ve done for the genre, the most lasting of impressions on me were the 1970s and 80s slasher genre, and the cornerstone of that era was John Carpenter’s 1978 classic “Halloween.”

For my money, if you re-released “Halloween” right now, it would still bank, which theaters are actually doing this year.  It’s a simple concept; a young boy, named Michael Myers, brutally murders his sister on Halloween night and is locked away in a sanitarium.  On one fateful Halloween Eve, during a routine prison transfer, Myers escapes Smith’s Grove Warren County Sanitarium.  Myers’ doctor, Sam Loomis (sound familiar) pushes the panic alarm as he fears that Myers will be heading back to his hometown, Haddonfield, also the scene of his original crime.  We meet three teenagers, including a very young Jamie Lee Curtis, who plays Laurie Strode, looking forward to a fun Halloween night, which of course turns into “The Night He Comes Home.”  I’ll try not to give too much away, but considering “Halloween” is 35 years old, it might be time for you to get off your ass and finally watch the most influential horror movie in the past 50 years.

“Halloween” is what really kicked off the modern slasher genre in the early 1980s, and created the so-called “formula.” However, if you watch the movie now, it’s surprisingly tame, with very little blood, just a little bit of boob-age  and a relatively low body count.  The blood and gore is more implied than splashed all over the screen.  Take this for an example; “Halloween” was rated R in 1978, but a movie like “Tourist Trap” from 1979, a year after “Halloween” was only rated PG, and I find “Tourist Trap”, while very cheesy, extremely creepy, and at times, harrowing.  If “Halloween” was put out today the same way it was shot by John Carpenter 35 years ago, it wouldn’t be anymore then a PG-13 film.

Enough politics of course, and we’ll continue with this question; What’s so good about “Halloween?”  Damn near everything!  From the opening theme and titles, to the camera work, to the acting, which isn’t perfect, but when you have teenagers talking about bullshit it will have to do.  Everyone in the film is believable, with Sam Loomis, played by the late Donald Pleasence, the stand-out.  What I credit Pleasence for the most is that fact that he stuck around for four sequels, and while he got hammier and hammier, he always added a touch of class.

What makes this film a classic is what it inspired.  While I would credit both “Night of the Living Dead” and “The Texas Chainsaw Massacre” with jump-starting the independent horror movie movement, “Halloween” made the most with what it didn’t have; money. For a movie made for less then $350,000 it looks great, has a good cast, and considering the fact that getting Pleasence to appear in the film was a decent part of the budget ($20,000) it doesn’t take away from the mood the film conveyed or compromise the quality.  “Halloween,” along with it’s predecessors proved that you didn’t need a ton of money to make a suspenseful and wildly entertaining film.

As far as Rob Zombie’s remake, or re-imagining, of “Halloween” in 2007 goes, while it’s not perfect, the more I think about it, its it’s own movie and can act as a stand alone film.  I almost take it as the “Henry:  Portrait of a Serial Killer” version of “Halloween.” What makes Michael Myers so scary is the fact that you really don’t know what drove him to kill his sister when he was a boy, or why he insists on always returning to Haddonfield to kill.  You find out later that he dabbles in the occult and celebrates Samhain, but in Zombie’s version he shows you Myers’ bad home environment and gives reason.  Once you do that the “magic” of Michael Myers is gone and he just becomes another John Wayne Gacy or Ted Bundy.  Once the mystery behind his actions are revealed he just becomes another serial murderer and it takes the luster off what you thought was just an unstoppable killing machine with no motive, which I find more frightening.

There really isn’t anything else to say about “Halloween” that hasn’t been said.  It’s a classic film, not just in the horror genre, but film in general.  It not only set a standard for the genre, but single-handedly created a sub-genre that is often duplicated, but never really reaches the standard of its predecessor.  It’s October people, pop “Halloween” into your DVD, Blu-Ray, VHS, Betamax, Laser Disc, or Reel-to-Reel and enjoy greatness.

Fun Fact:  An inside-out William Shatner mask was used for the iconic mask that the Michael Myers wore.

31 Nights Of Halloween, The Exorcism Of Emily Rose