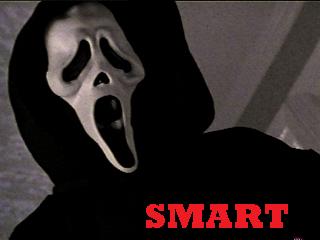 After the horror and slasher movie boom in the mid-to-late 1980s there was a definite lull.  I mean, name me one horror movie that came out between 1985-1995 that really mattered and changed the genre for the better (okay, I’ll give you a few of those).  But the genre was so bogged down in the same cliched plot device (teens isolated and stalked by an unstoppable force) but studios continued to insist on putting these movies out since they were a sure fire money maker.  Everyone knew that these movies were getting worse and worse, and it was the elephant in the room for the genre.  It wasn’t until 1996 that Wes Craven, who had recently fallen on hard times himself (ever seen “Vampire in Brooklyn“) got together with future “Dawson Creek” creator Kevin Williamson, and told everyone “Hey, these slasher movies are ridiculous.”  Thus, “Scream” was created.

“Scream” follows the exploits of a group of teens in Woodsboro, CA who are terrorized by a masked killer who we now know in horror lexicon as “Ghostface” (see above).  Sidney Prescott, played by Neve Campbell, becomes the prime target of not only the killer, but of newscaster, Gale Weathers, who wrote a tell-all book about the murder of Sidney’s mother and the possible conspiracy revolved around her convicted killer, Cotton Weary.

The film follows all the standard horror tropes, but they are smart about it.  Williamson weaves a decent story with smart writing and a pretty hip cast (for the time of course, I’m mean have you seen “Chill Factor“).  Before “Scream” there weren’t any other films that would have characters addressing their current situation and comparing it to something they’d seen in a movie.  In a way it was breaking the 4th wall without talking to the audience directly.  As a horror film fan it was awesome to see nerds like me on the screen telling themselves what they needed to do to survive in a horror movie, when in fact they were in one.  It was not only smart but extremely self-aware and it knowingly made fun of how stupid horror movies had gotten.  There was also the fact Craven killed off one of his main stars within the first ten minutes, which I always appreciate.

During his post-Nightmare on Elm Street era, Wes Craven tried his hands at everything from Bush-era poverty to voodoo, but it wasn’t until he returned to the slasher genre where his career took back off, I mean he got to work with Gloria Estefan* for God sakes….Miami Sound Machine man!  Anyway, what I always found ironic is the fact that Craven created a new series that was poking fun at the ridiculousness of slasher films and all of their sequels, and “Scream,” to a degree, became something it was making fun of in first place three sequels later.  I do, however, find “Scream 2” to be a sequel that surpassed it’s predecessor in many ways.

Craven has always been a trendsetting director; from “The Last House on the Left” to “Scream 4” and everything in-between (remember…..”Vampire in Brooklyn”**).  He’s adapted to the times, for the good and bad, but when you’re a director that has created two of the most well known horror figures in the past 25 years (Freddy too of course) it’s easy to forgive some of the mistakes.  If you haven’t seen “Scream,” be smart, don’t be dumb, check it out.

Fun Fact:  Craven had a cameo as the janitor “Freddy” in the same iconic red and green sweater.  Check it out.

**For the record, I really don’t mind “Vampire in Brooklyn.”  It was last decent movie Eddie Murphy made.