This was one of the fantastic films I saw at the Exhumed Film Festivals that I went too back in the good days. Like Burial Ground, Silent Night Deadly Night was one of my favorites that I saw there. I might even go as far as saying, Silent Night Deadly Night might be my favorite do to the sheer fun of watching this inside a packed theater at 2am. To see a film that came out way before I even step onto this planet inside a theater is one of the greatest pleasures I have ever had. There is something awesome about seeing a film like this on the big screen. 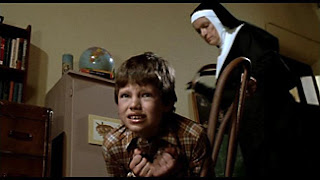 The film starts out on Christmas Eve 1971, with the family driving to see their grandfather (who was Back to the Future’s Pa Peabody). Mom, Dad, Billy and Ricky come to talk to Grandpop, put he just stares straight when they try. Everyone then leaves except Billy, who Grandpop begins to talk too.

He asks, “You scared, ain’t ya? You should be! Christmas Eve is the scariest damn night of the year!” He then asked if Billy was good this year, Billy says no and Grandpop brings to laugh saying, “You see Santa Claus tonight you better run boy, you better run for ya life!” Then the parents just happen to come back in and Grandpop stops talking acting like he was before they had left.

“31 bucks. Merry fucking Christmas.”
We come back to the family driving, in which they run into our killer Santa on the side of the road. They stop to see if he needs help. He pulls out his gun and kills the father. Billy gets out and runs. The mother jumps out and Santa begins to rape her as Billy watches. Santa then kills the mother and screams out into the darkness for the boy. 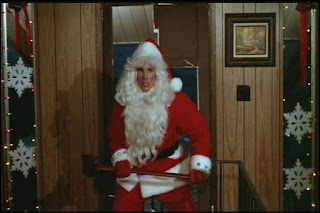 NAUGHTY!
Then we cut to building with a sign that reads, Saint Mary’s Home for Orphaned Children.

From here on the fun begins!

Officer Miller: “Can you believe this? It’s Christmas Eve and we got orders to bring in Santa Claus.”

It is a fantastic horror film and even in my house a fantastic Christmas film. If you have not seen this film it is a must. Sure the acting is atrocious and everything is over the top but it is a flat out good time, with so much comedy you will be laughing a ton. The gore, the 80’s nudity and the great story of a guy dressed up as Santa Claus killing the shit out of people is enough to compel anyone to watch this B-movie masterpiece. After the first time I saw this film I wanted to watch it again, that’s how much fun it is.
Anyone like a Classic 80’s Montage!

Ira Sims: [at closing time] “Seven o’clock… it’s over! Time to get shit-faced!” 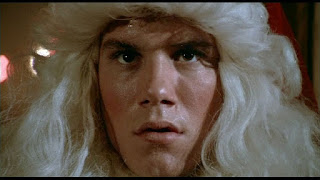 When you finish this film, you will say to yourself. “Wow that was something, there is no way on earth they could make another that was better or even on par with the first one”.

Well guess what they DID! They made the greatest sequel of all time…

31 Nights of Halloween, The Monster Squad