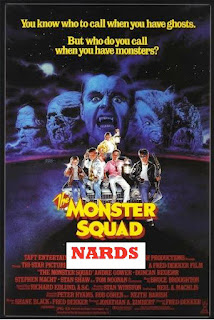 The time of VHS was magical.  Along with HBO, nearly all my horror upbringing came from one or the other.  Growing up I would go to Blockbuster Video (RIP) every Friday and I was allowed to get one video.  I always found myself in the horror section, watching any movie I could get my hands on.  From cheesy B-movies to typical slasher fare, I ate it all up.  Growing up in the late 80s early 90s, I was also a huge fan of “The Goonies” and any coming-of-age movie where kids went on an adventure.  With that said, the day I saw “The Monster Squad” from 1987 is the day my interest in more classic horror began.

If you think about “The Monster Squad” as “The Goonies” of the horror genre you’ve hit the nail on the head.  The rundown goes like this;  a group of young horror fans, who call themselves “The Monster CLUB,” stumble upon a plot by the newly resurrected Count Dracula.  The Count plans to obtain a mystical amulet used by Abraham Van Helsing to banish evil from Transylvania 100 years ago.  Only the Squad, a Scary German Guy, that kid* from “Kids Incorporated,” a “virgin,” and Frankenstein’s Monster stand in Drac’s way for world domination.

What I always thought was cool was the fact that Dracula was able to bring together a group of monsters to fight for him, which included The Wolf Man, Creature From the Black Lagoon (or The Gill Man if you will), and The Mummy.  Seeing that as a kid was astonishing, and considering that the late, great, Stan Winston did the creature effects was even more amazing.

Aside from Stan Winston, there were some really creative minds behind “Squad,” including Fred Dekker, who directed the underrated “Night of the Creeps” which is pretty much the predecessor to the also shamefully underrated “Slither.” And Shane Black, who you might have heard from that low budget movie that’s coming out next year called “Iron Man 3.”  This film has class written all over it.

The one complaint that I have about “Squad” is that upon watching it now, it does seem dated.  It’s super 80s, in the same way that “The Lost Boys” seems dated.  Most movies, and this is especially true for the horror genre, all seem to be trapped in a time warp in the decade they were made.  Keep this in mind, I’m not saying dated is a bad thing, but this brings me to an important point.  Maybe this is the reason why all of these hack filmmakers want to re-do all these old horror movies for the new, hip (and stupid) “horror” audiences.  The good news with “Squad” is that it was PG-13 back in the 80s so they won’t have to turn an R-rated movie into an audience friendly, and money making, PG-13 version.

“The Monster Squad” isn’t all blood and guts, its actually a fun little movie and something I would show my kid(s) and not feel like I was corrupting their soul(s).  As October, and Halloween, comes to a close, take a break from the gore-fests that you might be enjoying and check out “The Monster Squad,” and remember……”Wolf Man’s got nards.”

*that kid is Ryan Lambert

Fun Fact:  Bela Lugosi’s “Dracula” and Boris Karloff’s “Frankenstein” were both released in 1931 by Universal Pictures.