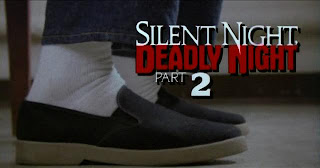 Unlike the first film I did not get to see this in the theater. Hopefully one day I can (its one of my goals in life). After seeing the classic Silent Night Deadly Night, I needed to watch it again. I looked high and low for the DVD and finally stumbled a pond a double feature with an, at the time unknown, Part 2—Wait what a Part 2? I bought that DVD right away. Once it came I popped it in the player and made some popcorn, little did I know that film would changed my life forever. I called the gang that saw the first one and told them to come over so we could all get together to watch this film. It made so much of an impression on us we couldn’t stop quoting the film. We never seen a film had so many classic lines like this. This was the days pre-YouTube and if I said GARBAGE DAY!, no one would know what the hell I was saying. This is the B-movie of B-movies, one that will live long after I’m gone. I have nothing but love for this badly made film.

Ricky Caldwell: “You tend to get paranoid when everyone around you gets dead.” 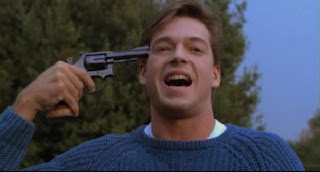 Ricky Caldwell: “Fuck off… Doc!”
NAUGHTY!
Review:
This film is one of my favorite comedies of all time. The problem with that statement is it’s not a comedy but a horror film and lets okay with me. Every aspect of this film is funny as hell. Eric Freeman’s acting is the most amazing thing on film stock ever! Each word is overblown and almost every time he talks he moves his eyebrows up and down. It’s extremely noticeable onscreen, never has something been so noticeable. His acting is so bad here, its a one of a kind of pure greatness. I’m not make this a personal thing with Eric Freeman because he had nothing to work with, it wasn’t his fault. Well he is part of it but in fact he is what makes this film watchable. I would like nothing but to interview him or even write something he could act in, something needs to happen nowadays he’s that awesome. 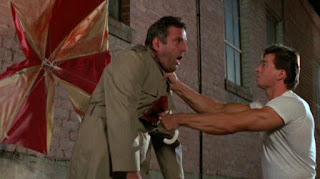 Chip: “Listen Bud… that’s what she said when I fucker her brains out on the backseat of old Red here.” 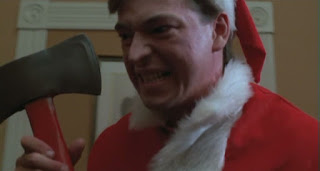 NAUGHTY!
The whole film is 88 minutes. More then half of the film is the first one. Yep thats right they use the first film as flashbacks to the point it is more material then part 2. The funny thing about this is Ricky didn’t have a lot of scenes in the first one. So Ricky tells about Billy’s scene which he couldn’t have known about. He wasn’t even in the room in these flashbacks, so how could he have
known? And he didn’t get to talk to his brother about the murders because Billy was killed. I have never seen any film do something like this, where a sequel uses the first film more then the new storyline. Sure you need to tell the viewer what happened to the family but not a hour of footage of the first film. Not sure if this was something planned or maybe to cut production cost. They writes say this was do to the first film getting dropped out of the theater. the producers wanted to re-edit it or make a part 2 with the first films footage to get it back in the theaters. Ether way the very little footage of a Part 2 is amazing enough to even out do the first in the crazy/funny/goofy category.
They even used it for the movie they go see at the theater!
NAUGHTY!
Ricky Caldwell: “My old lady couldn’t afford to send me to college. So I got a job. I was washing dishes, dumping trash… all that sort of shit. I think you’re gonna like this next part. It sounded like some squirrel getting his nuts squeezed.”
(Watch this video to see the single greatest part in any film ever!)
Ricky Caldwell: [Wielding an axe] “Oh Mother Superior! I’ve got a present for you!”
NAUGHTY!
Epilogue:
Even with the all the plot holes and the using of a ton of the first film’s footage for a sequel, this film still stands out as a B-Film masterpiece. Honestly both the first and second films are pure gold. Can’t say that about the others that follow, but when people quote a film without seeing it or knowing a damn thing about it, that’s when you know you have something special.
And boy is this film special. 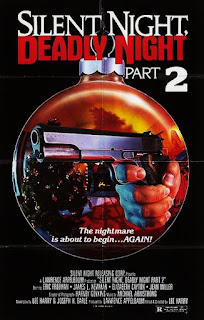