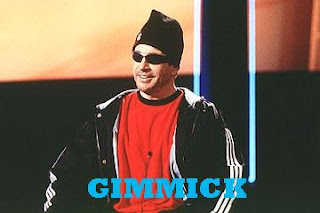 Now here’s a gimmick for you; take Warren Beatty, a poster child for White America, make him rap and booty dance with Halle Barry while dressed in mid-90s hip-hop fashions all the while on the run from a supposed assassination attempt.  Sound good?  Well, some of it is, while some of it comes off as a feeble attempt to address the fact that politicians are just put in place to give “we the people” a sense that we “voted” them into office while the truth is that they are in the pockets of interest groups and lobbyists.  That’s 1998’s “Bulworth” in a nutshell.

I could stop the review right there, but watching “Bulworth” in my less politically enlightened days and watching it now proves to me that this film didn’t get the credit it deserved when it was released* and how it was a zeitgeist for politics not only in the Clinton-era, but in the Obama-era now.

As I prefaced, “Bulworth” is the story of California Democratic Senator, Jay Billington Bulworth, running for re-election in 1996 (which was also the year in which Bill Clinton was running for re-election against GOP candidate, Bob Dole).  In hope of keeping his seat, Sen. Bulworth has transitioned from a typically Liberal stance, to a more “back to traditional American values” Conservative stance.  Upset with his new political agenda, as well as his broken marriage, Bulworth takes a contract out on his life in hopes of his daughter inheriting a substantial life insurance policy, which is given to Bulworth by an insurance lobbyist .  Not fearing reprisal, Bulworth begins a newer “political agenda” where he takes off his filter and starts telling his supporters and critics what politicians really think about them.  From going to a black church and explaining that the African-American community doesn’t matter in the grand scheme of politics and telling the Jewish community that their Jewish paranoia is actually real, Bulworth lets it all hang out, including his tongue while dancing with Halle Barry in an after-hours hip-hip club.

Beatty, a known friend of the Democratic establishment, skewers politicians from the left and right, as well as the 24 hour media coverage of politics, which plays a major part in the overall plot.  He points out how struggling members of our society get swept under the rug and find other “elected officials,” case in point, Don Cheadle’s drug dealer character, L.D.

Speaking of Beatty and Cheadle, the acting is quite strong.  Some of the supporting roles include Sean Astin, Oliver Platt, Paul Sorvino, and Jack Warren, with Platt as a standout, playing a campaign manager caught between the preservation of his career and “loyalty” to his candidate.

The things that irked me, and this plays into the whole gimmick, is the pounding rap soundtrack throughout the film.  Trust me, I love gangsta rap as much as the next hip-hop head, but it was unnecessary in some scenes.  The other problem I had was the use of a “chorus” by way of two black girls who essentially become Bulworth’s hype girls.  Personally, I found it a little obnoxious, annoying and didn’t really understand its place besides maybe comic relief, which falls flat.

Overall, “Bulworth” is a good political satire that tackles some of the hard issues, and to be honest, there hasn’t been another movie that was combined both tongue-in-cheek humor with something thought provoking in the political comedy genre .  Yes, we all know that special interest groups and lobbyists run Washington (as much as we want to tell ourselves that they don’t) and the middle class is disappearing while America becomes a two-class system.  The one thing that does hold “Bulworth” back from being a great movie is that hip-hop gimmick.  It works at times, but it becomes a joke in and of itself, and almost becomes cringe-inducing once you see Beatty in a skully and baggy pants.

*Yes, the movie received plenty of recognition from the Awards circuit (Academy and Golden Globes) but it wasn’t widely distributed and was able to make it’s production costs back in it’s theatrical run.