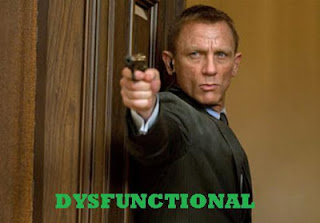 I’ll set the record straight; in no way am I as big a fan of James Bond than my co-reviewers.  I’ve seen the more well-known Bond films (Goldfinger, Thunderball, and the Pierce Brosnan flicks).  I enjoyed the re-done “Casino Royale” and thought Daniel Craig did a great job as a young (and crazy) 007.  However, watching “Skyfall” I found myself wondering; when did it become so cool to become a nihilist?

Let me start from the beginning before I lay into “Skyfall,” the 23rd Bond film, and third to feature Craig as the MI6 agent.  When I watch these new Bond movies I can’t help but realize that everyone wants to go the Christopher Nolan, Batman, route.  If I had to rename this film I would probably call it “The Bond Knight Rises.”  By the end of “Skyfall” James Bond has become Bruce Wayne in many ways, and I have a hard time understanding why they decided to go that route, oh wait, I know; it both makes money and is a sure-fire plot device.

When you think of iconic characters you could say Batman, Indiana Jones, John McClane, and James Bond.  They are part of our pop culture DNA and while I do appreciate a darker, more anti-hero, aura around heroes, it comes to a point where the soul is sucked out from them and they become a hollow shell with few redeeming qualities.  Apparently this is what our society has comes to.  They crave blood, vengeance, and nihilism.  For my money I might call “Skyfall” one of the most polarizing, and dysfunctional entries in Bond’s 50 year cinema history.

I don’t want to say too much bad about “Skyfall” because I know I’ll catch hell for it.  But, I’m going to do it anyway.  The plot, as paper thin as it is, includes a stolen hard drive containing important MI6 information, a former MI6 agent now terrorist, and a plot to kill M (Judi Dench).  There is a lot of MI6 stuff in this film as you can tell.  As we’ve come to know this new breed of Bond we know that he hates authority, hates women (sort of), but loves his country.  If anything can be said, “Skyfall” can live by the monikers, “Britain Soldiers On,” or “Bond Kills a Lot of People Without Remorse.”

Another issue I have, and this comes right back to dysfunction, is the identity of “Skyfall.”  The atmosphere is stark and everything seems critical and any wrong move can mean someone’s death.  Then you have something ridiculous where a komodo dragon eats someone (you have to see it).  This goes back to our review for “Abraham Lincoln: Vampire Hunter.”  Either be serious or silly, you can’t be both, especially after how serious both “Casino Royale” and “Quantum of Solace” were, it seems like the writers jumped into their DeLorean and decided to revive plot devices from “Die Another Day” one of the more ridiculous Bond films in recent memory.

To wrap up my gripes, I’d also like to bring up the third act of the film which devolves into two things.  One, Bond’s past.  This I really didn’t mind but it felt force fed and not necessary to the overall plot of the film.  Like I said before, they tried to turn Bond into Batman, and it seems contrived.  Two, the clear “Home Alone” rip-off.  Yes, imagine James Bond, the most bad-ass spy of all time, taking cues from Macaulay Culkin.  Again, this is something that you will have to see for yourself because you might think that I’m kidding, but unfortunately, I’m not.  I was waiting for both Joe Pesci and Daniel Stern to slip down a staircase at some point.

The one saving grace is Javier Bardem, who plays the primary antagonist, Silva.  He is clearly a bad-ass former spy with some serious sexual confusion and seems to hate women, just like Bond.  Throw in some mommy issues, a bad soft palate, and you have the makings of a great villain, but just like “Skyfall” he falls short, with poor character development and not enough screen time.  This is the film’s biggest mistake which usually prides itself on larger than life bad guys.  Silva is by far the best villain the series has seen since maybe Sean Bean’s 006 or Christopher Lee in “The Man With the Golden Gun” and it feels like he is just window dressing.

With two Bond movies already under his belt, you have to wonder how many more films Daniel Craig will stick around for (he already is signed up for Bond 24 and 25).  Yes, “Skyfall” is going to bank a bunch of cash just based on the 007 name.  However, tread carefully, there are a lot of issues with this newest Bond installment; thin plot, fodder characters, lackluster action scenes (though I do appreciate how they used a lot of practical shots, in particular the opening scene), but worst of all, an identity crisis.  Fanboys will love it, especially the end, but the casual fan; you might find yourself scratching your head.

Fun Fact:  Before he was Bond, James Bond, Daniel Craig starred in the “Tales From the Crypt” episode, Smoke Wrings in 1996.