Beautiful both visually and story.

Lets just get this out and say, Skyfall is the most beautiful looking film I’ve seen this year and I might even say within a few years. Roger Deakins has made a stunning looking film that wowed me at the theater. Thanks Roger you made the best looking Bond film in years. 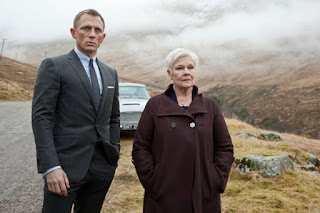 Skyfall might not be the best Bond film ever like a lot of people are saying, I believe From Russia With Love holds that title, but Skyfall is in the top 10.

Why? Because it is a different side of Bond. To make films that span 50 years and each one touches a fan in its own way is a remarkable thing. You might remember the first Bond film you saw. You might have a favorite film and maybe you have a film that touches your life. Each Bond film has one of these toward a person who views a Bond film. But when you do the formula like what Bond has used so many times it will at one point get a bit tougher for new ideas. We can all pick a point where Bond films got weak but believe it or not there isn’t a bad Bond film. They’re all good in their own way.

Skyfall takes a completely different approach to the formula and I stand up and applaud it. Yet, it never goes off the formula that we all have come to love.

The star of Skyfall is M. I didn’t mind M being the star. I enjoyed it, but we also got Bond’s backstory. I always wanted to touch on Bonds family in a film, but I felt it was slightly wasted for Skyfall. But then again it was nice to see that finally. Daniel Craig gives his best performance as Bond. Q works well and I can see an awesome future with him. M shines and it was great to see that. Silva is Craig’s best Bond villain. That might of been the one weakest part of Craig’s Bond films. Sure CR and QOS had okay villains but we really got a great, classic Bond villain for Craig this time. We also have a new composer which was refreshing. Sam Mendes did a great job and I hope he comes back for another one. And I look forward to having Ralph Fiennes in the future Bond films. Always loved the guys acting. 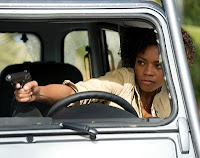 I liked Skyfall’s Bond girls but for Sévérine I thought she was underused. I would of like to have seen more of her instead of making her a throwaway. Eve was good and I’m curious to see her evolve in the next few films.

When I reviewed The Dark Knight Rises I said this was made for Batman fans, well Skyfall was made for Bond fans. There are a ton of Bond references in this film that came off really badass.

A older couple was sitting to the right of me and they just kept telling me how they have seen all the Bond films at the theater since the start. They said Skyfall remind them of that early time period and they liked that about it. 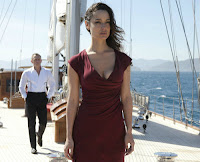 Speaking of the ending as a fan, this is the ending we needed. We are now back to the classic formula. Moneypenny, a new M and Q is finally back. That scene at the end in the office gave me chills because we haven’t had that in such a long time. Even the set design with the dark wood and coat hanger just got me excited. I even kept hoping that Bond would throw a hat onto that hanger.

It felt so awesome.

Skyfall is a wonderful film. It’s fantastic film with a few issues, but hey almost all films have some nitpicks.

I didn’t like how the story of the film was about the lost drive and Bond was trying to track it down. Then half way into the film after making so much fuss about it not a word comes up on it again and it becomes protecting M. I understand why, but I just would of like a better transfer of the two parts.

I felt the komodo dragon scene was okay on till the eating. I know they went for that classic Bond death but it came off a bit odd.

And the last thing was all about Bond being old…Might be my most hated thing about this great film. Two films before it, it was the rage that he was all young and new. Now he just too damn old. And I like the old storyline but maybe in a few years when Craig is ready to say goodbye. Not now. Sorry I felt that was out of place and it got to me.

The Skyfall scene was fantastic. It felt so different but yet so Bond-ish. And I just can’t get over the beautiful look of this film. Really beautiful lighting and composition. The song by Adele was great, felt like the great classic Bond themes we all love! 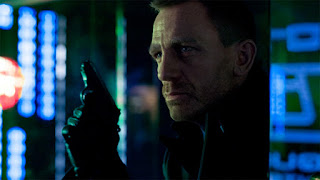 All in all I thought it was a great film. It looks amazing in IMAX even taught it didn’t use IMAX cameras and even the Sony 4k viewing I saw in the small theater looked fantastic. (even though their audio sucked. Theater’s fault not the film.)

Go see Skyfall its a good time and a damn good Bond film.