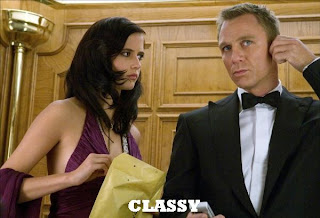 If it wasn’t for my co-reviewer, DJ Valentine, I might not have posted another Bond review for the rest of the month.  As I briefly touched on in my “Skyfall” review, I’m not the biggest James Bond fan.  Not saying he hasn’t gotten into some great adventures in exotic locales, with sexy Bond Girls, but the spy-espionage-adventure genre isn’t one of my favorites.  But when you get the perfect storm of directing, writing, and acting, that’s something that I can appreciate and enjoy, and calling “Casino Royale” classy would be an understatement.

First, all the people calling for Daniel Craig to call it quits when it comes to Bond; quiet, please.  Unless you just woke up yesterday Craig had shown his acting chops before playing the newly-promoted 00 Agent. Please check out “Layer Cake” and you will see what I mean.  He had charm, charisma, and was still a dick to women, all common traits of our favorite secret agent.

Second, Martin Campbell knows how to shoot action scenes.  “Goldeneye” is my favorite Bond film from the modern era.* It had great action in which you can easily suspend disbelief, a very likable Bond, and interesting villains.  Plus, the movie moves swiftly and exposition didn’t weigh it down too heavily.

Last, and most importantly, the writing.  Cheesy writing will put anyone in a tift, but if it’s done correctly with the right actors doing the talking, it can be easily forgivable.  Paul Haggis, from “Crash” fame, does wonderfully as the third wheel of the screenplay which includes Neal Purvis and Robert Wade (the screenwriting duo from “Goldeneye” to “Skyfall”).  You can tell who wrote the best dialogue in this film.

All this praise and I’ve forgotten to say anything about “Casino Royale.”  Don’t get this Bond re-boot confused with the 1960s “Casino Royale” there is nothing really in common outside of the name and the fact that there are about five different James Bonds, oh, and Orson Welles, but I digress.  The film follows a younger, sprier, more naive Bond, who is out to stop a network of terrorists and their mysterious accountant, Le Chiffre, played by Mads Mikkelsen (in my opinion he should have used his real name in the film, it sounds a lot more bad ass then Le Chiffre).  Unlike “Skyfall,” “Casino Royale” gives me what I want in an action movie.  Sure, there are some scenes in the movie that are over the top, but I never really thought anything was too out of bounds, even the incredible free-running opening action set piece that takes place in Madagascar didn’t make me suspend too much disbelief.  There are your typical double-crosses, moments of danger for Bond and his fellow Bond Girl Vesper Lynd, played by Eva Green, and globe-trotting from Miami, Montenegro, and everywhere in-between.  The supporting cast is strong with Judi Dench and Giancarlo Giannini leading the way, but I would liked to have seen a little more Jeffrey Wright, even though he does take a larger role in “Quantum of Solace,” the continuation to “Royale.”

The stripped down style of this new Bond is welcome respite from the over-the-top Pierce Brosnan films (namely “The World is Not Enough” and “Die Another Day”) and there are rarely any moments that I would take away from “Casino Royale.” It brings the class back to the 007 Universe where its short on the one-liners and long on the witty dialogue.  You could argue that this Bond hasn’t developed his signature one-liners yet, and I can’t say I really missed them (I am partial to “No more foreplay” however).

Bottom line, I think the reason I like “Royale” so much is the fact that it doesn’t feel like a Bond film, just a great action movie with stunning set pieces in a world where Batman might reside.  It’s dark, gritty, brooding, and did I mention classy as hell.  There was no need to make it artsy and harken back to the Bond days of yore.  Sure you get the Aston Martin, but no fetishizing a car and playing a sprawling soundtrack as it leaves a garage…..cough….cough….Skyfall.  Stick to the basics; hot women, action that doesn’t make me roll my eyes (too much) and a good story with some dialogue I can sink my teeth into.  You get all this and more with “Casino Royale.”

Fun Fact:  Mikkelsen, who will be playing a young Dr. Hannibal Lecter for NBC in 2013, had Giannini in his pocket in “Royale.”  Oddly enough, Giannini was one of Lecter’s victims in 2001’s “Hannibal.”

*I count the Modern Bond era from 1995-Current.