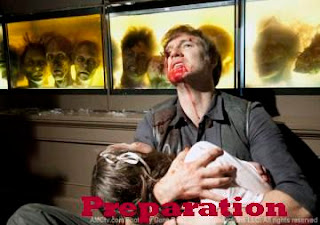 Whoa, well, that was one way to end a mid-season finale.  Through eight episodes of Season Three of “The Walking Dead” you can tell that AMC has taken the gloves off, and their wallets out, and told Robert Kirkman and his crew, “Look, “Breaking Bad” is ending, “Mad Men” only takes places in an office building, here is the cash that you need, and deserve.”  Basically, two-and-a-half seasons of preparation is coming together and come February 2013 I believe all Walking Dead fans will be very happy with AMC as they are finally figuring out a show that seemed to be aimless a year ago.

If you’re a comic book reader, which I’m not, I’m sure there are many things that you might like or dislike about this season, but as simply a TV watcher, I’m thoroughly enjoying myself and like the way the journey is shaping out.  The secrets of the prison are slowly being unraveled, and speaking of unraveled, the sanity of Rick seems to be heading in that direction after the death of his wife Lori, and birth of his daughter who I’ll just join Daryl in calling, “Asskicker.”

We finally meet The Governor, played by David Morrissey, and he lives up the hype as one of the greatest villians in comic book history.  He runs the town of Woodbury with not so much an iron fist, but a smile and brass knuckles behind his back.  He’s charming enough for you to trust him, but one misgiving and he’ll be feeding you to the”biters” or collecting your head to save in his zombified fish tank trophy room.  I did find myself feeling sorry for him when his daughter was killed by Michonne, which tells you how effective Morrissey is at playing the sociopathic Governor, but then you remember that he was one move away from raping Maggie while Glenn listened in the other room.

Merle Dixon also makes his grand appearance after his mysterious disappearance in Season One.  He’s almost in more piece and is now rocking a spiffy hand knife that would make Captain Hook blush.  What’s interesting about Merle is that while he is a blood thirsty, racist, psychotic redneck he still cares for his wayward brother, Daryl, and never gives up hope of finding him.  Given the way Episode 8 ended, will Daryl and Merle’s bond become stronger or will it break as the two brothers are forced to make a decision that will change one of their camp’s lives forever.  Even better is that fact that neither exist in the comic books so even die-hard fans don’t really know what will become of the Dixon brothers going forward.

What got me excited is the introduction of another gang of survivors lead by Tyreese, played by Chad Coleman, who you might remember as Cutty from “The Wire.” I remember hearing the casting choice and I thought it was spot on just reading about the character from the comic book, but not really knowing what will become of him in the future and if his and Rick’s camp can co-exist, given the looming menace of The Governor.

Overall, the first half of the season has been solid.  With a budget, good writing, and strong performances from all characters, even Carl, who I’m starting to warm up to now, the next eight episodes should be something to behold.  I hope you’ve been preparing  for the zombie Apocalypse, because it should be a hell of a ride.

Fun Fact:  This isn’t Chad Coleman’s first rodeo with the undead.  He provided the voice over talent for the character “Coach” in Left for Dead 2.

Double-ovember, For Your Eyes Only