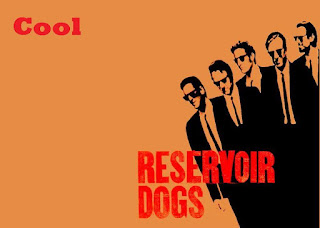 Disclaimer:  Reviews this month will either be listed as Crappy or Happy Holidays.  This in no way is saying that certain movies are bad or good, but rather will make you feel good or happy, or depressed or crappy, but on occasion crappy will mean just that, a big pile of crap.  Glad we cleared that up, now enjoy the reviews.

20 years ago I was eight years old, and Quentin Tarantino had made his first film and it was playing at the Sundance Film Festival in Utah.  Being eight I was more interested in Nintendo, Saturday Morning Cartoons, and watching “The Goonies” for the 100th time.  Tarantino in no way had been engrained into my brain….yet.  Come 1994, “Pulp Fiction” is released.  I’m still a little too young to fully grasp that two movies had been made within two years of each other that would change the way I thought, wrote, and viewed film.  But more on that later, let me tell you why “Reservoir Dogs” is the coolest movie to grace cinema in the last 20 years.

This past Tuesday I went to my local multiplex to see “Dogs” as it was intended, on the big screen (thank you Fathom events for giving audiences the chance to see classic movies again in a theater setting).  It was quite an experience to think this is how people were watching this same movie 20 years ago at Sundance or even Cannes.  It was incredible to be honest.  The crowd looked a little young, like scenester hipster kids who just heard about QT after “Inglorious Basterds.”  But I digress.

“Dogs” is the tale of six strangers handpicked by crime boss Joe Cabot, played by Lawrence Tierney, to hold up a jewelry store and steal a large stash of diamonds.  Without fail, the heist turns sour with several of the men getting killed and the survivors questioning what happened, and thinking that one of the crooks might actually be a police informant.  Simple right?  Well, it actually is a relatively common plot device used in crime films, but Tarantino weaves a narrative that is anything but.

The main thing that sets Tarantino’s movies apart from other common fare is the narrative construction that moves forward and backwards through time with ease.  Sure, flashbacks are used where we meet Mr. White, played by Harvey Keitel, Mr. Blonde, played with maniacal perfection by Michael “why don’t I get more work in Hollywood” Madsen, and Tim Roth as Mr. Orange, but the non-linear storyline was something relatively new in Hollywood 20 years ago, and while many try to duplicate it, rarely can anyone replicate it like Tarantino.

Normally in films with murderous criminals we don’t feel remorse or anything in common with them, but its funny that as soon as these criminals open their mouths and start talking about the meaning of a Madonna song, why tipping in a restaurant is a biased idea, or whether Pam Grier played the role of Christie Love, you forget that these guys are bad guys because they talk just like you and I.  This is another trademark of Tarantino; he makes you feel empathy for characters that can be supremely evil and sadistic, and by sharing a common bond, such as love for Blaxplotation movies, or music from the 1970s, you feel a kinship, which is incredible even while someone is having their ear cut off with a straight razor.

While “Dogs” might not be Tarantino’s magnum opus (I’ll reserve that for another review upcoming), it still stands as a touchstone for independent film in the early 1990s, and encouraged young filmmakers to go out and try their hands at movie-making.  Without “Dogs” you probably wouldn’t have movies like “The Usual Suspects,”  “The Way of the Gun,” or “Lucky Number Slevin.”  While all of those films are cool, they will never have the far-reaching influence of “Reservoir Dogs.”

Fun Fact:  A reference to a female thief named “Alabama” is made by Joe Cabot to Mr. White.  You might remember another female criminal named Alabama Whitman from the Tarantino-penned “True Romance” from 1993.

Crappy Holidays: The Man With The Iron Fists