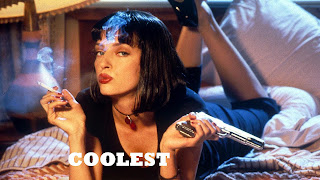 Okay, you’re the new kid on the block, you just wowed people in Sundance and Cannes with “Reservoir Dogs,” you completed a script for “True Romance” and worked on a script with Oliver Stone for “Natural Born Killers.”  What do you do next if you’re Quentin Tarantino?  Well, you help resurrect John Travolta’s career, create a film that will change cinema forever, and turn Samuel L. Jackson into a Hollywood leading man (of sorts).  You simply create “Pulp Fiction,” for my money, the coolest film ever made.

To create the coolest film ever, you have to start with a cast, and “Fiction” gives a Woody Allen movie a run for its money cast-wise.  From Eric Stoltz, to Christopher Walken, and everyone in-between, you could say that everyone in this film gives the performances of their lives.  No one is mailing it in, and while some of the dialogue might come off a bit hokey and a little too noir-ish, the actors are giving it with conviction and believability.

To keep the cool factor going, you have to know you’re genre, and in Tarantino’s case, he uses every genre he’s ever loved and it shows.  You have blaxploitation, exploitation, french new wave, action, rape-revenge, buddy movie, the list can go on and on.  While you can call “Pulp” a drama film, I’d almost like to call it a homage to the essence of film.  It’s the best of what the genre can be in a tight 2 hour and 50 minute package.

As a side note, as much as people look into the film for it’s religious undertones, (Marcellus Wallace is the Devil, and Vincent and Jules are sent to get his soul back) get off of that already.  At the roots, “Pulp” is a grindhouse film at its best, and looking for deeper meaning in a grindhouse film is like looking for a virgin in the Catholic Church.  Get off your high horse cinephiles, for all we know it’s Wallace’s dirty laundry in the briefcase and it’s yellow because he pissed all over it.  Boom!  Mystery solved.

As for the plot of “Pulp” it goes a little like this.  Two hitman, Vincent and Jules, are sent by their boss, Marcellus Wallace, to procure a package from four men in an apartment.  Needless to say things get bloody, and both Vince and Jules need to lay low and dispose of a headless corpse in a trunk.  The plot moves to a series of vignettes that involve Vince, a boxer named Butch, played by Bruce Willis (I would also call this film a comeback of sorts for Willis as well) and a date with Vince and Wallace’s wife, Mia.  Needless to say, things don’t go so well with that either.  Moving along Butch pulls a fast one on Wallace when he doesn’t throw a boxing match in which Wallace loses a great deal of cash.  While Butch plots his escape from Los Angeles he gets sidetracked in the search for his missing gold watch.  Not to sound like a broken record but things turn sour for Vince, Butch, and Wallace himself.  Just like Tarantino’s previous outing, “Reservoir Dogs” the story is told in a non-linear fashion that keeps you guessing and even when characters meet their end you still end up seeing them again.

While many call “Pulp” the best film in Tarantino’s repertoire; it’s a tough call for me.  It’s groundbreaking in the development of indie cinema throughout the 1990s, and proved that good writing can be both dramatic, smart, cheesy, and funny as hell, but I’ll cover my favorite film of his in a future review.  Tarantino turned the mundane conversations of what they call Whoppers in Paris into high art and created a cultural zeitgeist.  He turned the inhuman into people that we can relate to, and while there is a good amount of violence in “Pulp” it never feels gory or overdone in a way that seems unneeded to move the story along.