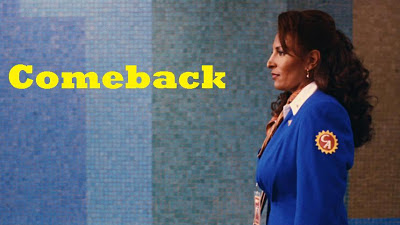 Pam Grier was a big star in the 1970s.  I mean she was Foxy Brown (the original Foxy Brown, not this one, even though this one did have something to do with the following film) and Coffy.  She was the epitome of “the baddest bitch” (and not this shit either).  Pardon my language, after dealing with Tarantino flicks for the past two weeks I finally feel like I’m getting into character.  The novice Tarantino head will consider either “Pulp Fiction” or “Inglorious Basterds” his masterpiece (for the record I have no issues whatsoever with either film, they are both fantastic in their own rights) but “Jackie Brown” from 1997 is by far Tarantino’s most accomplished effort and showed a master at work, in complete control of his cast and story while developing an alternate universe that paralleled, or maybe even intersected at times, his “Pulp”and “Reservoir Dog,” universe.

A comeback can come in many shapes and sizes.  For “Brown” this was a comeback of sorts for both Grier and Robert Forster (who was nominated for an Academy Award for his performance) and also Tarantino himself.  Between the time “Pulp Fiction” premiered in 1994 and the release of “Brown,” QT had hit some rough times.  Have you ever seen “Destiny Turns on the Radio“? And while “Four Rooms” was decent enough it was still a bomb.  Come 1997, he had a lot to prove, and by God, he proves it.

Like any great genre film, the plot is simple, yet complex.  We have an airline stewardess, played by Grier, who works for a small-time pimp and drug-runner named Ordell Robbie, played by Samuel L. Jackson (and for my money the best performance of his career).  Two ATF agents bust the stewardess and she heads to prison.  Enter the middle-age bail bondsman, who falls head over heels for our stewardess who has a plan to put an end to Robbie’s career.  We have twists, double and triple-crosses, and enough quirky characters and quotable lines to shake a stick, or an AK-47, at.  “Brown” is an exercise in blaxplotation for the mod-set.

What makes “Brown” special is the fact that normally when books are taken and transformed from the written word to the silver screen, it’s never done as good and you always hear the same comment, “the book was better.”  Well, when the author of said book that you are adapting says that this is his favorite adaptation of his work, you got something good.  “Brown” is based on Elmore Leonard’s novel “Rum Punch” from 1992.  You might remember another Leonard novel that was adapted shortly before “Brown,” which was “Get Shorty” from 1995, starring John Travolta, who was Vincent Vega in “Pulp Fiction.”  It’s the circle of life baby.

Overall, if you want the perfect Tarantino flick to check out during the holidays, or anytime for that matter, it has to be “Jackie Brown.”  While it might be the most unappreciated of his film repertoire, it’s an exercise in writing, acting, and direction at the genre’s best.

Fun Fact:  Have you ever payed close attention in “Pulp Fiction” to the music faintly played (between 2:30-2:35) in the hallway where Jules and Vincent are discussing foot massages?  That song is “Strawberry Letter 23” which you can also hear in this scene in “Jackie Brown.”