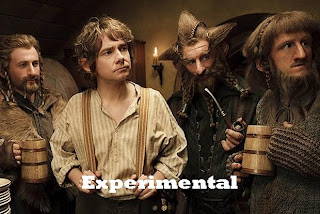 The Hobbit: An Unexpected Journey – Experimental

The hub-bub of the holiday season is “The Hobbit:  An Unexpected Journey.”  Yes, you get to return to Middle-Earth to see all of your favorite Middle-Earth friends, well, some of them, not the ones that you really care about however.  But this time around Middle-Earth looks a little different, of course that all depends on how much you intend on spending at your local cineplex, but more on that later in the review.  I digress, yes, “The Hobbit” is a movie that is nearly a decade in the making and while it does give fans of the books and the previous trilogy what they want, director Peter Jackson is still two movies away from the big payoff, and with his experimental new vision of The Shire and beyond, we are left to wonder if the experiment will change how we view movies in the future.  I hope this isn’t the case.

Onward and upward, let’s get into “The Hobbit:  An Unexpected Journey” the first of three planned films to tackle the classic J.R.R. Tolkien novel from 1937.  I’m not much of a reader, but I’ve attempted to read “The Hobbit” or “There and Back Again,” and the three “Lord of the Rings” books, I really tried, but I just couldn’t do it.  I would think it would be the same thing if I tried to read any of the “Game of Thrones” novels.  I much prefer something visual and I’ll stick with the Cliffs Notes versions of the books.

“The Hobbit” follows Bilbo Baggins, the uncle of Frodo, our hero in “The Lord of the Rings” trilogy.  A younger Bilbo is commissioned by Gandalf the Grey and sets out with a company of 13 dwarves, led by Thorin Oakenshield, who is out for both revenge and to take back his family’s home in The Lonely Mountain.  The only problem is that a deadly dragon, named Smaug, had taken up residence in the mountain.  If you weren’t into the original “Rings” trilogy I don’t expect any new converts to this new “Hobbit” trilogy.  There is a lot of walking, a lot of fantasy-speak, and long dialogues of exposition.  That’s no indictment to the film, I actually enjoyed it quite a bit, but I can see why people have problems with the “Rings” franchise.  Another thing that seasoned Middle-Earthers might find alarming is the lack of fighting.  There are a few scenes where you get to see that dwarves are formidable warriors, but they are mostly running away for their enemies, which include goblins, trolls, and orcs, especially Azog the Defiler (truly a bad-ass name).  The lack of hand-to-hand combat is a bit troubling, but I hope for more swordplay in the coming sequels.

Ashamed to say this, I was actually falling asleep within the first 45 minutes of the film.  It prodded along, many of the jokes fell flat, if they fell at all, and aside from the exposition in the beginning explaining the dwarves’ plight, there was no action to really speak of.  After I got a wake up call, right when Bilbo had decided to make a decision that would change Middle-Earth forever, I was able to finally get into the film. As I journey further into this review I feel like I’m forgetting the elephant, or troll, in the room; both the 3-D and 48 frame per second element of “The Hobbit.”

I’ll start with 3-D; no need for it in this film, or any film in my opinion.  In any type of fantasy film, you have to suspend disbelief, it’s a must if you are going to enjoy anything from the genre.  However, there are points where the 3-D really takes you out of your zone and you realize that the CG is poorly super-imposed over a real backdrop of clouds, valleys, and mountains.  Think anything at Disney World, EPCOT, or the former-MGM Studios park (ironically enough, MGM was one of the distributing companies for “Hobbit”).  I noticed this more near the end when the CG was obvious.

Now, the bigger controversy; 48 frames per second.  How can I describe this method of filmmaking?  I’ll hand it to Peter Jackson, he has balls of New Zealand granite to try this experimental method of filming.  It’s unlike anything you’ve ever seen before, unless you own a TrueMotion TV at your house.  Tarantino was right, this is truly TV in public.  Benny Hill fans will appreciate some of the scenes where it looks like someone in the projection booth set the fast-forward button to x1.5 and forgot to turn it off.  It’s painfully obvious during scenes with a lot of action where characters are running or fighting.  You are left to wonder, what is the purpose of this technology?  Why do we need TrueMotion in movie theaters now?  We’re all aware that 3-D is a fad, but hopefully this doesn’t become the newest fad to hit our films in the future.

Aside from my gripes, I did enjoy “The Hobbit” once the paced picked up.  While the sword-fighting lacks, the action set-pieces are well done and keep you on the edge of your seat.  There were times during the movie that I had a hard time picking the CG from practical effects, including Azog the Defiler and his pack of roving orcs.  The return of Gollum is great, and is once again brought to stunning life by Andy Serkis.  The game of riddles segment is probably the best scene in “The Hobbit.”  It will take time to get used to the larger “fellowship” this time around, and the lack of a Legolas or Gimley-type character is hard to swallow, but with the sequels in the pipeline I’m sure I’ll gain an appreciation for my new dwarf friends.  Add in the plot line of a necromancer, Bilbo obtaining the One Ring, and Smaug the Dragon, and we have some wonderful adventures ahead of us the next two years.

Fun Fact:  Talk about a flip!  While both Martin Freeman (Bilbo Baggins) and Benedict Cumberbatch (Necromancer) appear on a collision course in “The Hobbit,” they are quite the contrary in the BBC’s “Sherlock,” where they play Watson and Sherlock Holmes, respectively.