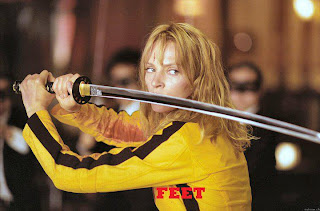 After the brilliance of “Jackie Brown” and showing his critics that he wasn’t just an exploiter of violence, our old friend, Quentin Tarantino, stood up, brushed the dirt off of his shoulders, straightened his tie, and said “Guess what motherfu*cker, I’m going to do an old-school kung-fu flick now!  What!”

Of course that’s not what he said, but it would have been bad-ass if he did nonetheless.  After all the accolades of both “Pulp Fiction” and “Brown,” Tarantino decided to work on his first pet project.  A true genre film that centered around one woman and her blood-thirsty quest for revenge against a group of assassins that tried to murder her on her wedding day.  That movie(s) is “Kill Bill” or as I like to call it “Uma’s Got Some Hammertoe.”

*I will be reviewing these films (Kill Bill Vol. 1 and 2) as one film.  Sure, I could split it up into two reviews and make you wait for the second one just like QT made us wait in the theaters, but since it’s the holiday season, I’ll do you guys a solid.

As mentioned above, the core of “Bill” is a revenge film, wrapped in a Shaw Bros. movie, encased in a Shakespearean tragedy, tied up with a nice bloody bow.  You can take Tarantino’s three previous films and throw them out the window; “Kill Bill” is a love letter to a by-gone era of 1970s chop-socky karate flicks that members of the Wu-Tang Clan were getting high to back in the early 1990s. (side note:  RZA of the Wu-Tang Clan was the music supervisor for Vol 1.)

Across a four-plus hour epic, if watched back-to-back, Tarantino takes us on a blood-spattered journey with The Bride, our protagonist, as she extracts revenge the best way she knows how; with a samurai sword crated by Hattori Hanzo and the Five-Finger Exploding Heart Technique taught to her by Pai Mei, the mysterious karate master.  If you grew up in the golden age of karate movies, watched “The Green Hornet” or were “Protectin’ Ya Neck” with the Wu back in 1993, Tarantino creates a world that you can still put in the same universe as “Pulp Fiction” and “Jackie Brown” but fashions it in a way that makes it seem other-worldly.

The plot is simple, but its the way that Tarantino weaves this revenge yarn that’s the treat.  Told through a series of flashbacks and his trademark non-linear format, we see The Bride training with Pai Mei, learn how to walk again starting with just one wiggle of one toe, her vengeance on the Deadly Viper Assassination Squad, and finally her face-off with Bill himself.  Oh, I almost forgot;  plenty of Uma Thurman feet through both films.  No need to head over to your local adult video store if you love feet, because Tarantino shares your tastes.

I know I might be selling this movie short, and I’m withholding a ton of information, including plot twists, but my recommendation is to stop reading this review, go out and buy “Kill Bill” and enjoy it for all it’s worth.  Thurman’s turn as the killer bride is good, but its funny how she all but fell off the face of Hollywood after what you might call her magnum opus.  One of David Carradine’s last roles as Bill is almost as iconic as his turn as Caine in “Kung-Fu,” and the fight scenes, as over-stylized as they are, are extremely fun to watch with plenty of arterial spray.  Chill…..have a pill, and watch “Kill Bill.”

Fun Fact:  If you want to get creative you could call “Fox Force Five,” first mentioned by Mia Wallace in “Pulp Fiction,” as a precursor to the Deadly Viper Assassination Squad.  There was a Black fox, Asian fox, French fox, and two American foxes.  Coincidence?