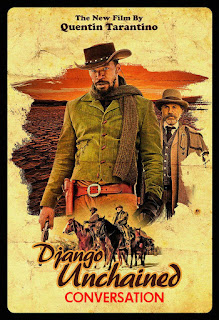 I’ve been hearing this a lot lately;  “Tarantino is back…..classic Tarantino,” blah, blah, blah.  My question is; “What would you call classic Tarantino?”  Yes, he’s known for his witty dialogue, mind-bending plot twists, and recently, alternative takes on important periods in U.S. and European history.  But I reiterate; “What would you call classic Tarantino?”  My answer:  There’s no such thing!  People like to come off as smarter than they are, myself included, but of course I’m reviewing movies so I need to come off as a little bit of an expert, aka, dickhead.  Tarantino is Tarantino, you can’t say any of his work is “classic Tarantino” because every film he makes is entirely original and nothing like the previous film he made.  Here’s a practical example of two other directors to prove my point:  Take Ridley Scott.  He is known for his sci-fi epics, “Alien” and “Blade Runner.”  After those two films he went in entirely different directions, please see “Gladiator” and “Matchstick Men” as examples.  Classic Scott would be sci-fi, and he went back to that with ‘Prometheus” with mixed results.  Another director would be William Friedkin, known for taut thrillers and exciting crime work, please see “The French Connection” for a excellent example.  Friedkin left those movies for a while but returned with “Killer Joe” a taut thriller that keeps you on your toes with plenty of violence.  “Joe” would be classic Friedkin.  Digressing, enough talk about “Classic Tarantino.” Yes, you can say a movie of his is a classic but enough saying “Classic Tarantino.”  I feel it’s something that someone says whose only seen “Kill Bill” and “Inglorious Basterds.”  Sorry, I had to get that off my chest, but this brings me to Tarantino’s newest “classic” the Southern-fried Spaghetti Western “Django Unchained.”

“Django” is a modern day “Birth of a Nation,” only with more guns, more talking, and the white man getting his comeuppance.  It’s intriguing, noteworthy, timely, violent, offensive, and thought-provoking.  Not since 1997’s “Amistad” has the issue of slavery been covered in such an unflattering light.  Whereas Steven Spielberg directed “Amistad” with his usual gravitas that includes a two-and-a-half hour history lesson, Tarantino directs with HIS usual gravitas that includes memorable characters, witty dialogue, graphic, sudden violence, but this time, with more maturity.  I might add that Tarantino had the added challenge of directing his first movie without the assistance of late-editor, Sally Menke, who passed away shortly after the premier of “Inglorious Basterds” in 2010.

Tarantino uses both the original 1960s “Django” film, starring Franco Nero, (who he also gives credit to during the opening credits for “Django”) and the much-maligned (and probably still is) film “Mandingo” as a template for his newest blood-soaked revenge opus.  We follow Django, played with much restraint by Jamie Foxx, as he and Dr. King Schultz, a dentist turned bounty hunter played by Christoph Waltz, set out from Texas to Tennessee and into the dark heart of Mississippi to collect bounties and save Django’s wife, Broomhilda, from the evil clutches of plantation owner Calvin Candie, played with conviction and maniacal delight by Leonardo DiCaprio.  Once again, the plot is easy to follow and unlike much Tarantino fare, is streamlined and doesn’t deviate into his non-linear storytelling aside from a few flashbacks of both Django and Broomhilda.  In typical Tarantino fashion, he is also able to find humor in dark subject matter which ranges from KKK riders who are having disguise issues to cameos by the likes of Don Johnson playing a slave-owning Colonel Sanders, and Tarantino himself as an Australian slaver.

If you’re a fan of Sergio Leone, or any Western, you’ll love the vast landscapes that Tarantino uses to great effect and moments of tension between characters.  It’s much like “Basterds” where the tension usually pays off with a grand crescendo of violence, blood, and dead bodies.  Contrary to what people might say about the violence in “Django,” its nowhere as bad as some of the other stuff that is out there, but I think it’s the context in which the violence is portrayed that might get some people’s goats.  Aside from the physical violence, which runs the gamut of black on black, white on black, and black on white, there is also the assault of the dreaded “N-word.” dum-dum-dum……the word that people still try and skate around as much as they can.  However, I don’t have a problem with Tarantino’s use of the word, especially in “Django.” Spike Lee might have an issue with it, but when you haven’t made a movie that matters since “Inside Man,” I’d be a grumpy, short, black guy too.  The word pretty much takes on a character in-and-of itself.  It flows freely throughout the film, but you know what, it flowed freely in 1858, and it still flows freely today.  No matter your creed or race, everyone has said the word, either out loud or under their breathe.  George Carlin gave us the “Seven Words That You Can’t Say,” and thank goodness he didn’t put this on the list.

Maybe it’s my white guilt, but yes, I have black friends.  Does that give me the excuse to use the “N-word?” No, it doesn’t.  There really isn’t a need to use the word at all, but we still use it, even in casual conversation. While I was watching “Django,” in a packed theater, I knew the dialogue was going to be chalk full of “the word that shall not be named,” so i was waiting to hear some noise when stars like DiCaprio and Samuel L. Jackson starting dropping the “N-bomb” like it was going out of style.  But, alas, not a peep.  Perhaps people were prepared to hear that type of language, and if you’ve seen “Jackie Brown” you know that Tarantino loves using it in a casual sense.  The reason this word is effective, and makes sense in “Django,” is the context.  Yes, slavers and plantation owners used this word freely (of course I don’t know that for sure, but what would you expect racist slave owners to say in the 1850s).  Tarantino’s dialogue has always been known to be both direct, and a zeitgeist for the time and place the story is taking place in.  He takes ugly language and somehow makes it beautiful and poetic.

The one problem I did have with “Django” was ironically enough the music.  Usually the music that QT picks is almost as important as his dialogue and characters, but this time around it seems like a cash-in.  There’s original music from John Legend and Rick Ross (the first time in a Tarantino film that music was actually written for his films), and while you’re not going to include music from the 1850s, why include the 808-thumping sounds of Ross.  In a film full of good ideas, this was by far the most awkward and perplexing.  It almost felt like a cheap MTV-type movie gimmick, see the trailer for “Gangster Squad” as a prime example.

As most of Tarantino’s films, there will be a lot of conversation about the violence, language, and how he takes portions of genre films that he loved and makes them his own.  But I find “Django” his most polarizing film.  You already have the line in the sand where many people think that he is tearing the scab off the topic of slavery and uncovering the ugly, but true, side to life in the South for African-Americans in the 1850s.  Others are saying the violence is too much in a post-Newtown world, while I’m saying, relax!  Sorry social crusaders, it’s a movie, or maybe this time, it’s a little more than a movie.  Maybe it’s time to have a conversation about our ugly past.  Since the founding of our nation we have been gun-toting, slave-buying, violent jingoists.  As a society we crave violence in our films, video games, and news.  But the moment something tragic occurs it’s time to tone it back.  Enough toning back, we have to face our past demons and prepare for new ones that are sure to come.  While “Django Unchained” might not be Tarantino’s best film, it’s an example of filmmaking where someone decides that we can’t keep looking at our past through rose-colored glasses.  There were some despicable things, and people, in the work-up to the Civil War, and whether you like his style or not, no one spins a story quite like Quentin Tarantino who re-writes history again, sort of, with “Django Unchained.”

Fun Fact:  The story of Broomhilda, or Brynhildr, is an old German legend that involves a Norse Valkyrie.  She was later popularized by Richard Wagner’s “Ring” cycle opera series.