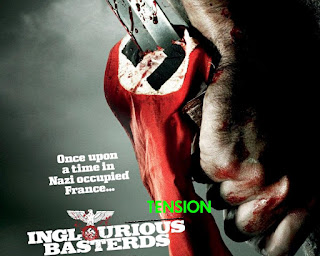 I don’t think any war in our nation’s, or world’s, history has been done to death like World War II.  There have been romantic, comedic, heart-wrenching, and just plain bad tellings of “The War to End All Wars.”  On the top of my list I have “Saving Private Ryan” and the so-far-under-the-radar “Enemy At The Gates,”  whereas craptastic crap like “BloodRayne” remains at the bottom of the English Channel.  But you know that when a filmmaker like Quentin Tarantino gets a bug up his ass that he wants to make a war film its not going to be like any war film you’ve ever seen.  Enter, “Inglourious Basterds.”

Before I dive into “Basterds,” I’ll preface;  I was actually going to review all of Tarantino’s directorial efforts in order, but the holidays sidetracked me and I ended up skipping right to “Django Unchained,” where you can read that review right here.  I’d like to think of “Basterds” as the moment where Tarantino went mainstream, and I mean REAL mainstream.  “Basterds” was his first film to feature a TRUE leading man in Brad Pitt, and he finally was able to reward one of his actors with an Academy Award in Christoph Waltz.  In a way it was also one of his most accessible efforts in theaters where it was the largest release for a Tarantino movie to date, “Kill Bill Vol.1” was a close second.  And it was the first of his films to be available in a Digital, DVD, and Blu-Ray format (since the writing of this review you can pick up the Tarantino XX Blu-Ray Collection that features all of his films in an HD format).

“Inglourious Basterds” follows the exploits of a group of Jewish-born Army Mercenaries and their commanding officer Lt. Aldo Raine as they merrily maraude across Europe killing, scalping, and branding Nazis.  But that is just a small portion of the film, which also follows a French-born Jewish female theater owner planning her revenge against Nazis who are planning to premier a propaganda film entitled “Nation’s Pride.”  Included in attendance are Joseph Goebbels and Adolf Hitler.  As you can imagine there are twists, typical Tarantino humor, and scenes of fantastic violence.  The difference between “Basterds” and Tarantino’s other films is the tension and you can cut it with a knife in several scenes.  The best examples include the Strudel scene and the Bar scene.  What you also start to see, and this might have started after QT finished up his “Kill Bill” saga, is the change in his tone of film.

Tarantino began making and writing films with an edge, a very gritty edge.  He dealt with the wrong side of law in thieves, murderers, sadists, and hit-men   And for the most part, it all seemed to fit in some realm of reality.  When “Bill” was released you began to see a different side; which included more fantastic plot devices and stories that revolved more around revenge and the bloody road that leads to it.  I’m not going to say that Tarantino is getting lazy, its really just a maturation process in his filmmaking, or an evolution if you will.  He’s moved from the gritty streets of Los Angeles, to a fantastic Earth 2 of DC proportions.

Look at any war genre film from the 1960s and 70s, and “Basterds” has its fingers all over it.  From the original “Inglorious Bastards” to “The Dirty Dozen” and maybe in throw in a little “Wild Bunch” and you have “Basterds” in a nutshell.  What Tarantino really brings out is the fact that a so-called “foreign” film can be accessible to any audience.  There are a ton of subtitles across this nearly three hour epic, but the actors who read the dialogue do it so well, and with such fluidity, that you get seduced by their delivery, no matter if its in German, French, or Italian.  I brought up Christoph Waltz winning an Oscar for his portrayal of Col. Hans Landa, aka, The Jew Hunter, and part of that victory must have come from his ability to act and deliver dialogue in English, German, French, and Italian with gusto, hilarity, and conviction.  Every time he appears on screen you are transfixed on his slimy SS Officer.  You both hate and love Landa, and there aren’t many characters in the history of film you can say that for.

Is “Inglorious Basterds” a good movie, of course it is.  While some viewers saw it as a little boring, uneven, and maybe even a romantic take on Nazis and World War II France, there is still plenty to take away from “Basterds.”  Also, I would put money on the fact that the ending of “Basterds” is one of the most satisfying in any Tarantino film to date, even “Django Unchained.”  If you haven’t already, or maybe if you’ve even seen it a few times, check out “Inglourious Basterds,” it’s tons of fun, and started a new chapter in the career of Quentin Tarantino.

Fun Fact:  Eli Roth, who appears as Sgt. Donny Donowitz, aka The Bear Jew, in “Basterds” directed the scenes from the film-within-a-film, “Nation’s Pride.”