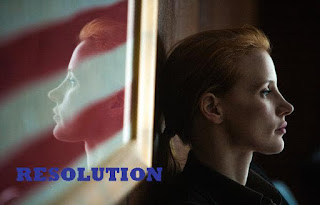 It’s fun to follow the career of a director; take my recent reviews on Quentin Tarantino as an example.  Take a director like Kathryn Bigelow.  If you look at her career you can say she’s done it all.  Horror movies (Near Dark), crime films (Point Break), neo-futuristic noir (Strange Days) and war (The Hurt Locker).  You can honestly say she’s grown-up from genre films to Academy Award-winning fare, and of course it doesn’t hurt that at one point you were banging James Cameron, but I digress, as I do so often.

I remember the day 9/11 happened; I was a senior in high school sitting, or probably sleeping, in AP Psychology class.  We had someone run into our classroom and tell our teacher to turn on the TV.  The next thing I see is one of the World Trade Center towers on fire.  It was a little perplexing and it almost seemed like a prank, albeit an extremely odd prank.  Next thing I know a plane runs into the 2nd tower, and shortly after the first tower succumbs to the fire and collapses.  This was my “JFK” moment.  If you were alive when John F. Kennedy was assassinated you remember where you were at that moment, the same goes for the generation that saw the Twin Towers fall and coat Lower Manhattan in a cloud of dust.  A surreal moment in World History.  The following 10 years we were haunted by the al-Qaeda leader, Osama bin Laden, who orchestrated many terror attacks that cost the lives of thousands of people around the world.  It wasn’t until May of 2011 that another moment occurred that you may remember; Barack Obama would appear on TV and tell the world that bin Laden had been killed in a compound in Pakistan.  I personally felt relatively unchanged.  Sure, a terrorist leader was dead, but did it make us that much safer?  That is a question you have to ask yourself when you finish watching “Zero Dark Thirty.”

Bigelow has cornered the market on dramas that include both the Middle East and our never ending “War on Terror.”  Despite some shortcomings, “The Hurt Locker” was a well done film centering on a bomb disposal team and the stress of the job.  “Zero Dark Thirty” lacks the action, and luster, of “Locker” and focuses on the daily grind of select CIA officials as they cut through government red tape, and personal tragedies, to finally target, and eliminate, bin Laden.  If you’ve watched the trailers and expect a slam-bang, balls-to-the-wall action thriller, you’re watching the wrong film.  This film is a grind, but there is resolution.

“Thirty” follows CIA operative Maya who has just been sent to Pakistan to oversee the CIA’s Detainee Program a few years after 9/11.  Told through a series of vignettes, the film navigates through many of the tragic events that lead to the eventual whereabouts of Usama bin Laden from the London bombings in 2005 to the bombing of the Marriott in Islamabad.  The movie isn’t as much of a mystery as it is a procedural, similar to something that you might see on “Law & Order: Criminal Intent.”  The one difference is that you see the toll a grueling manhunt can take on the human psyche and how the government can be a hindrance when it comes to completing a mission.

People are complaining about two things in this film; the torture scenes and how information was gained for the making of the film.  Look, every country that has been involved in some sort of war theater over the past 100 years has probably been involved in some type of interrogation efforts that weren’t in the Geneva Conventions.  It’s not just America to blame for abuse of these Conventions, and I don’t think “Thirty” took it too far, they just called it like it is.  I’m sure there have been grave abuses during our “War on Terror” but to play Devil’s Advocate, the “War on Terror” isn’t really a war, it’s more of a mantra.  We have not declared war in this country since 1942 when Japan bombed Pearl Harbor and the U.S. entered World War II.  Is this an excuse for torture, of course not, but we can’t get upset when we know practices such as waterboarding have been used on terror suspects and detainees.  As far as classified information obtained by the makers of the film, I’ll just leave it at that, I don’t need anyone knocking on my door after reading this.

What bothered me about “Thirty,” weren’t the torture scenes or acts of violence carried out by the terrorists, it was the relative lack of character development.  We gain from the film the fact that Maya, played by Jessica Chastain, has been on the hunt for bin Laden since she left high school and it’s the only thing that she has worked on while with the CIA.  We know it’s personal, to a degree, and that her obsession has led to her leaving a daughter and possibly an entire family, or maybe even losing a family member during 9/11.  As she comes to the end of her search we see her first real emotion, as she cries.  Her tears can mean many things; the fact that bin Laden has finally been killed, the fact she is finally going home, or just maybe the fact that her search is over and she is left with nothing, and nobody will know her sacrifice.  She has to go back into a world that will never know her work, and she has nothing left to work for.  Her life came down to one man, who is now gone.  It’s deep stuff, if you take the time to look at it from all perspectives.

Aside from the character development, “Zero Dark Thirty” is an epic retelling of the 10 years after 9/11 and the eventual killing of Usama bin Laden, the boogeyman who had been haunting the lives of Americans since that fateful day in September.  Has Bigelow done it again, and will she capture Oscar gold again?  Only time will tell.

Fun Fact:  SEAL Team Six, a branch of the US Navy, carried out Operation Neptune Spear, the operation which eliminated their target, Usama bin Laden, in May 2011.