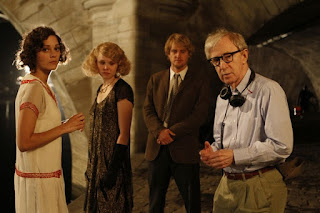 *This review is being provided by guest contributor; Nicole Schiavo.  Thanks for the submission Nicole and we look forward to having more guest submissions.*

Direction in this movie, starts from the very top, the direction provided by arguably one of the most influential directors in the business, Woody Allen.  After a string of ill contrived and marginally received flops, “Midnight in Paris” brings Allen back into the (in my opinion well deserved) critically acclaimed; he once again found his direction.
The film features Owen Wilson’s portrayal of Gil, a likable but somewhat flaky writer (I would like to think that Allen, would have played Gil had he been 30 years younger.  Wilson. in my opinion, is a fine replacement) engaged to unlikable Inez, played by Rachel McAdams (“Mean Girls” Regina George all grown up).
The story is driven by Gil’s complete lack of direction – in his work as a writer and in his complete lack of navigational skills – getting lost on the city’s narrow time-worn streets, he winds up getting lost down a small unmarked alley and whisked away at midnight by a 1920s-era vehicle.
This magical vehicle (suspend reality here) brings him smack in the middle of 1920s Paris – where Zelda and Scott Fitzgerald mirror the relationship of Gil and Inez (and we all know how well that ended), Gertrude Stein and Hemmingway are writing buddies, and where Salvador Dali is as strange as we have always imagined.
Getting tossed back in time lets Gil live out every fantasy that an overly romantic writer could have – why should he want to go back to the “now”?  Ever the romantic, Gil not only relishes this amazing opportunity, he doesn’t question it, ever (Slight gripe, but keep the reality suspended, throw it out the window, this is a fantasy).
In the most literate way, Gil had be to completely lost in Paris in order to regain his sense of direction, in his writing, in his relationships, and more importantly his life.
This movie is just pure fun – the cast is great and the setting is romantic, beautiful Paris.  Peel back the layers and hidden a little deeper in the film is the realization that although nostalgia is a great place to visit, you can’t really live there – direct oneself in the now and all its possibilities.