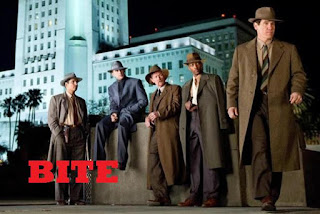 Its been a while since there’s been a straight-up cops fighting the mob type of film.  The last one I can really think of  was “American Gangster.”  The problem with this genre is that it’s been done to death, and how can you really re-invent the wheel.  Sure, you can make it more modern and take it out of the 1920s or 40s, but that’s half the charm of these films.  I like to see big Cadillacs, bright lights on buildings, and usually, extraordinarily bad acting.  Well guess what, “Gangster Squad” is more than happy to bite off of all these cliches, and more.

If you take “L.A Confidential,” “The Untouchables,” and “Dick Tracy” you pretty much have “Squad” in a nutshell.  The story follows a group of LAPD officers who are tasked by Nick Nolte’s police chief to take down East Coast-turned-West Coast mobster Mickey Cohen, played by Sean Penn.  The story is basically “Hey, Cohen is a bad guy doing bad stuff.  Let’s shut his operations down!”  Stock story, stock characters, and very little room for characters to develop.

I personally like the way the film was shot.  I thought it was stylish, even though it did use an obscene amount of slow-motion camera work, and the fact that nearly all the shootouts and action set-pieces were shot practically, I appreciate that even more.  Ruben Fleischer has a knack for the quirky, and has a real grip on filming practical effects, but I don’t think he has a knack for filming drama.

While the action kept me in the film, the acting and writing left a lot to be desired.  Not even a cast that includes Ryan Gosling, Emma Stone, and Penn can save a paper thin plot that is so predictable, it was almost laughable.  In a film that had room for a few twists here and there (one again, think “L.A Confidential”) they decided to go the big budget action romp route.  While I was in the theater I started to think about the video game “L.A Noire.”  They both have similarities in the time frame (Post World War II) and really harped on the fact that Los Angeles was at “war” and soldiers are needed to win wars.  I wanted to know the war storied behind John O’ Mara (Josh Brolin) and Jerry Wooters (Gosling) but I got nothing of the sort.

While this movie might have been something to look forward to, it received a lot more publicity after the shooting in Aurora, CO in July 2012.  “Squad” had to go back and completely re-shoot an entire scene that featured a movie theater shooting as well.  While there are plenty of bullets flying throughout the course of the film, I’m puzzled why a re-shoot was necessary.  Whether it’s a movie theater or not, shooting and killing people is still shooting and killing people, no matter the venue.

Overall, “Gangster Squad” is a movie that will come and go through the theater, and probably make it’s money back, but it’s not changing the genre in any way.  The cast is good, the direction is good, but the story and characters are down right criminal.