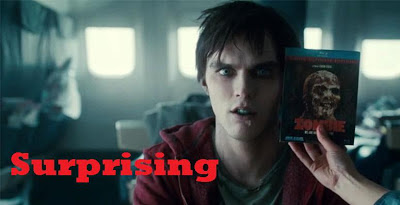 *This review is being provided by guest contributor, Kayleigh Brown, aka, Kayleighkill.  Thanks for the submission Kayleigh, and we look forward to having more guest submissions.  You can find Kayleigh on YouTube through the following link.  She is also on Twitter and Tumblr.*

I won’t lie, going into Warm Bodies, I couldn’t help but mentally notice the Twilight parallels. After all, both movies come from Summit Entertainment, it’s a love story about a girl and her monster, and there’s people trying to kill them; not to mention, one very familiar “laying in a field” scene. The similarities stop there.
Where Twilight failed, this movie picks up the pieces, and then some. It isn’t just your typical ‘girl meets monster’ flick. Yes, its central theme is based on love, but its much broader than that. It isn’t just “I want to die to be with you” love. It’s love in the form of acceptance, family, friends, and memories. It’s looking past differences and accepting someone for who they are. I’m looking too far into it; you have to watch the movie to understand that analysis.
I won’t spoil any secrets in regards to Warm Bodies, but it definitely is a paving stone for completely reinventing the zombie image. It offers not only ridiculously funny quips at times, but touching moments with some serious overtones, and sometimes even a cringe-worthy scene or two. The romantic development of the main characters is almost placed on the back-burner, as the rest of the story unfolds around it. They really took a fairly predictable plot (from the trailer) and turned it into something more. The likeability of the characters is also a huge factor as to why I enjoyed the movie so much. It helps with great actors such as Rob Corddry and John Malkovich supporting the upcoming talent that spotlight the movie. (Nicholas Hoult and Teresa Palmer)
Overall, the movie was a surprising hit, right down to the creepy antagonists of the movie, the ‘Bonies’. I wouldn’t want to run into a flesh eating skeleton in an alley anytime soon. Even the soundtrack is amazing. Bob Dylan? Guns N’ Roses? M83? I’ll take it.

*This review is based on a sneak preview that took place on January 10th, 2013.  “Warm Bodies” will be widely released on February 1st 2013.  Thank you Regal Cinemas for the FREE tickets for this event.  This movie will be revisited upon it’s actual release.*