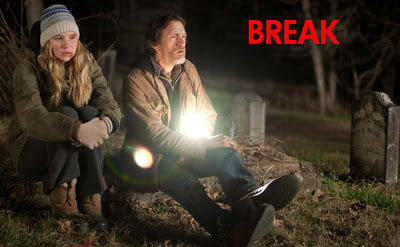 We all know Jennifer Lawrence is Hollywood’s new sweetheart, and rightfully so.  She is young, talented, attractive, and someone you would want to hang out with.  She is Julia Roberts without the toothy grin.  She is the girl that all the other girls want to be and all the guys want to be with.  She’s a revelation if you will. When I first got a glimpse of her on the red carpet of the Oscars about two years ago, I really didn’t know what to make of her. She was this young new face with a smart mouth.  Sorry, but I kind of took her for a bitch, like she was too good for the Oscars.  I look at her now, and she is down right adorable and so self-deprecating, it’s irresistible.  I also appreciate the fact that she takes chances, and makes the role her own.  For a perfect example of what made her a star before she became a star was her first major role in 2010’s “Winter’s Bone.”

You can call “Bone” a “White Trash Noir.”  Lawrence plays Ree, a 17-year old girl taking care of her two younger siblings without the help of her drug-affected absentee mother and meth-dealing father.  After her father skips town, she finds out that he put their house up for bond and the whole family could be homeless within a week.  Ree takes it upon herself to track down her father and navigate a neighborhood full of drug dealers, murderers, and crooked cops.

The story is simple, but the themes of innocence lost, family responsibility, and loyalty run deep in this film.  In Lawrence’s portrayal of Ree you can see the reason why she was chosen to be the lead in “The Hunger Games” as Katniss Everdeen.  She is a strong female protagonist, probably the strongest female character I’ve seen in years who isn’t a superhero, but she still has a vulnerability to her as she navigates her dangerous world with two younger siblings in tow.  You want to grab her and tell her to stop in her quest for her father, especially when you see some of the people that she has to deal with in trying to find the answers.

While Lawrence is great, I also have to tip my cap to John Hawkes, who plays crystal meth dealer, and Ree’s uncle, Teardrop.  Think Walter White if he was from rural Arkansas, only scarier.  He’s the last guy that you want to ask help from, and the last guy you want looking for you if a deal went south.  Hawkes is one of those guys that’s in a lot of stuff but he never reallygets credit.  I remember seeing him for the first time as the Liquor Store Clerk in “From Dusk Till Dawn,” and he pops into movies every now and than and leaves an impressions every time.  I like to think of him as the poor man’s Walton Goggins.  Hawkes was nominated for an Oscar for his portrayal in “Bone,” and rightfully so.

If you haven’t already, there’s no reason to not check out “Winter’s Bone.” It’s the genesis of Jennifer Lawrence; where she got her break if you will.  She commands every scene she is in, is a natural, and strikes the perfect balance between tough and fragile.  You never get the sense that she is doing anything for herself, mother or father, she knows that they are all beyond redemption.  Her only care is the welfare of her brother and sister, which in a time where everyone is so wrapped up in their own world, is a welcome relief in film.

Fun Fact:  In the year that “Winter’s Bone” was nominated for Best Motion Picture at the Academy Awards, it had the smallest production budget at only $2 Million, compared to the budget of “Toy Story 3” which was $200 Million, the most expensive film nominated that year.