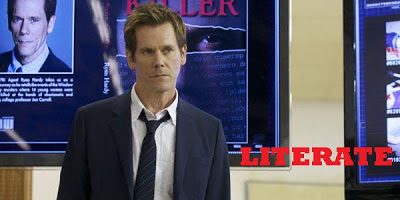 FOX takes chances, and that’s what I like about them, and that includes their sister channel, FX, which has been putting out quality TV for over a decade.  Another thing I like is Kevin Bacon, not just because he is awesome, but he also takes chances, yet, doesn’t get enough work.  Back when I was in middle school I really loved Edgar Allan Poe.  He wrote about murder and betrayal, and just his life intrigued me; dead at 40, penniless, and this work is still some of the most respected in all of literature.  Take everything I like, shake it up, dump it out, and you have “The Following” a literate modern Gothic thriller with potential.

Two things about “The Following,” 1) The show relies heavily on the works of Poe, from “The Black Cat” to “The Tell-Tale Heart.”  If you aren’t a Poe fan, or are lacking in Poe-knowledge, you might feel a little lost throughout the first episode.  2) The show isn’t as gory as you might think.  There has been a lot of talk about an excessive amount of violence in a post-Newtown world, but to be honest, most of the excessive violence happens after the fact and only the aftermath is shown.  That’s not to say, however, the show isn’t violent, but any show where a women shoves an ice pick into her face you might have to say Parental Discretion Advised.

“The Following” follows Ryan Hardy, an ex-FBI agent with a history with Joe Carroll, a professor-turned-serial killer who murdered 14 college students before his capture by Hardy.  In typical fashion to the genre, Hardy is left with a scar caused by Carroll that continues to haunt him, which turns out to be a clever nod to “The Tell-Tale Heart.”  Hardy has become an alcoholic since the incarceration of Carroll and once his former quarry escapes in the opening sequence of the episode, Hardy finds himself drawn back into the dark work of Carroll and his obsession with Edgar Allan Poe.  James Purefoy, who you might remember as Marc Antony in HBO’s “Rome,” stars as Carroll, who does his best Hannibal Lecter impersonation with relatively decent results.  He even keeps his British accent, which I appreciate.  We don’t get to see enough British serial killers on TV for crying out loud.

The show moves in a reasonably predictable manner until the end where the show’s first cliffhanger kicks in. What does Carroll have in store for Hardy?  Will Hardy’s demon’s finally catch up to him, if they haven’t already?  What is Carroll’s master plan?  What happens in the Sorority House?  Being that “The Following” already has an order of 13 more episodes gives me faith that we’ll get to see the characters evolve and the story progress with the dynamic between Hardy and Carroll given the spotlight.

Aside from the cast, the fact that Kevin Williamson has his fingerprints all over this show gives me hope that FOX will give it a solid chance.  Williamson has proven to write good genre pieces such as the first three “Scream” films and “The Faculty,” and he’s got a good track record of making money for networks. (see “The Vampire Dairies” and “Dawson’s Creek”)  “The Following” is a combination of “The Hannibal Lecter” films (Manhunter, Silence of the Lambs, and Hannibal), “Criminal Minds” and the works of Matthew Pearl, namely “The Poe Shadow.”  It has all the right pieces in place, but will audiences be literate enough to give it a fair shot?  Hey, FOX is counting on it, this will hopefully be the show that replaces “Fringe” as it’s number one drama.

Fun Fact:  Edgar Allan Poe was a native of Baltimore, MD, which is also home to the Baltimore Ravens, who are named after a work published  by Poe in 1845.  “Nevermore!”