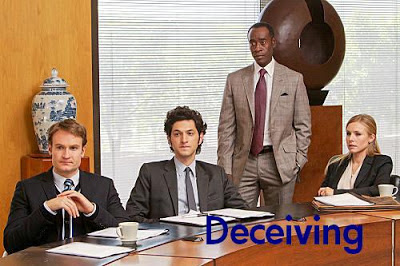 Slowly but surely, Showtime is catching up to it’s big brother, HBO, with some of the best programming since “The Red Shoe Diaries.”  I kid, I kid!  Jokes aside, between “Dexter,” “Homeland,” and “Shameless” the network that tells you to “Hold on Tight” is showing a pulse when it comes to funny, subversive comedy, and intriguing, dramatic work.  But what happens when you take a good idea, in theory, add a great cast around it, and try and make it your replacement for “Weeds?” Well, you get “House of Lies,” a breezy dramedy series made of pure fluff…..or is it, deceiving you?

This isn’t to say that I don’t enjoy fluff and hijinks;  I thoroughly enjoy the fluff of “Parks and Recreation,” and the madcap insanity of “Curb Your Enthusiasm.”  What you get with “Lies” is a group of Managing Consultants from Galweather & Stearn, based in Los Angeles,  led by the sociopath/corporate headhunter, Marty Kaan, played brilliantly by Don Cheadle. (who earned a well-deserved Golden Globe this year)  Kaan (get it) is the Polaroid of the modern American working professional; failed marriage, single father, a compulsive sexual appetite, especially for his equally damaged ex-wife, and some serious mommy issues.  However, when its time for Marty and his team to put their game-faces on, they never fail.  Well, they fail until their figure out a way to win, which is the ongoing theme of “Lies.”

To put it in perspective,think “Entourage” having relations with “Californication” and “Weeds” deciding to pull their pants down and join the party as well.  What I enjoy about “Lies” is the banter between Marty’s team, or his “Pod,” which includes Kristen Bell in probably her best work since “Veronica Mars” and Ben Schwartz, who you might know as Jean-Ralphio from the aforementioned “Parks.” The young cast is perfectly anchored by Cheadle who is excellent in everything, but you really get to see him show a darker, and very much damaged, side to his acting.  If there’s any reason to watch the show it’s to show his deceiving nature destroy his enemies but nevertheless have him get caught in the crossfire as well.  While the show started out breezy enough, as the first season progressed it started plunging into darkness, and while there are still a few zingers that will tickle your ribs, you also have a pit in your stomach and think to yourself?  Am I supposed to be rooting for these characters, or wagging our fingers at them and saying, “See, that’s what you get.”

Another gimmick of the show, but it still works pretty well, is Marty breaking the 4th wall.  One of my favorite comic book characters is Deadpool.  One of his actual powers IS breaking the 4th wall.  But in reference to Marty, its usually a way to move the story along and remove any doubt from the viewers’ mind what exactly is going through HIS mind.  It’s effective one two fronts; 1) Marty knows he is the smartest guy in the room and feels he controls his team, but you’ll notice that he is only totally in control when he is in his comfort zone; his work. 2)  Sometimes the situations of the show do get a little convoluted so it does help to have someone quarterback you through the situation, and who better than a slimy Management Consultant.  What could be said negatively about these scenes is that the show is not allowing the audience to put the pieces together themselves and treating them with kid gloves, which might come of as insulting to some viewers.

Overall, “House of Lies” is a fun show in the vein of “Entourage” minus the big time celebrities, the best you’re going to get is Cat Deeley, for all you SYTYCD fans out there. (if you have to ask what it means, well, you’re probably better off)  With a definite lack of comedy on HBO, this might be Showtime’s foothold to take some audience away from them, unless you like “Girls,” and if that’s the case you should really ask yourself, “Why?”