The film is good. I found it mixed thou, do to the films focus.

The issue here is we’re presented with almost two different stories in a short 94 minute film. In the beginning we start with the relationship with FDR and Daisy (his sixth cousin) and that’s fine. But then King George comes to Hyde Park (First time a King and Queen of the United Kingdom visited America) and that’s fine too. But the two just don’t seem to mix well. Sure the story between FDR and Daisy is okay, but to me the fun parts are with FDR and King George. Here we have two of the world’s most powerful people, and they both have disabilities.

King George has issues speaking and FDR can’t walk. At a time of world war this is a story that is simply amazing. So I found the relationship between the two a hell of a lot fun as these two men find out that they’re more similar then they would of thought. Then the film goes back to Daisy and I just kept wanted it to head back with King George. This kept happening and I kept thinking why couldn’t the whole film be about FDR and George. I enjoyed the way the film looked but the script I thought lacked focus. 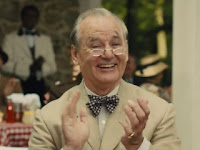 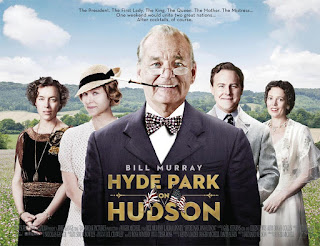 Bill Murray was awesome. I really enjoyed him
playing that of President Franklin Delano Roosevelt. I also thought Samuel West as King George VI was good too. The rest of the cast was pretty good but like I said FDR and King George’s relationship is the best thing about this “mixed” film.