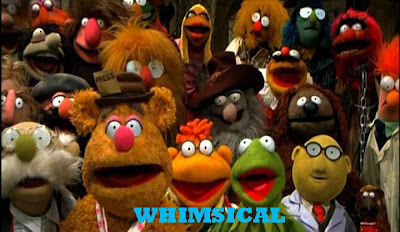 My first exposure to The Muppets wasn’t any of their movies, it was actually “Muppet Babies” which for me, still goes down as one of my favorite cartoons of all time, and the best cartoon of the 1980s.  There was nothing wrong with it; it had “Star Wars”, “Indiana Jones”, and pretty much any pop culture reference that you could think of at the time.  It was smarter than the kids that were watching it, and for my money, still holds up pretty well.  The Muppet movies didn’t really come around for me the first time around, in fact I remember watching most of them on VHS when my dad recorded them for me.  Think about it, “The Muppet Movie” was released in 1979, and to say the least I was the last thing my parents had on their mind at the time.  However, when I was old enough to know how to operate the VCR and go through the stacks of VHS recordings that we had in our house, it was that fateful day I popped in 1981’s “The Great Muppet Caper” starring all of your favorite Muppets; from Kermit the Frog to *John Cleese, yes, John Motherf*ckin’ Cleese is in this movie.

Like most Muppet fare the plot is going to include plenty of hijinks, celebrity cameos, and humor that goes well over the intended audiences heads, including one in “Caper” that refers to a guy cheating on his wife.  Jim Henson had some balls on him.  Any who, we open “Caper” with our three heroes, Kermit, Fozzie, and Gonzo in a hot air balloon talking about the opening credits.  Next thing they know their balloon is going down right in the middle of a crowded street which breaks out into our first musical number.  Further hijinks ensue that involve a case of mistaken identity, stolen diamonds, and a love triangle between a frog, pig, and Charles Grodin.  Good clean family fun.

What stands out, like most Muppets movies, are the songs.  The highlight is “Happiness Hotel” that has the sound of a blues, zydeco, and a big band mash-up that works perfectly and will be stuck in your head for days.  Some of the other songs get a little sappy, but there’s still a whimsical element to the music that can appeal to the young and old alike.

While the setting of the movie takes place in London, it could really take place anywhere.  This isn’t “The Muppets Take Manhattan” where the city is almost as big a star as The Muppets, but you still get a chuckle from some of the dry British humor we all know and love.

If you’ve only seen 2011’s “The Muppets” with Jason Segel and Amy Adams, which is fine in it’s own way, do yourself a favor and treat yourself to “The Great Muppet Caper” that has plenty of mad-cap antics and no cheap Disney tie-in’s.

*Disclaimer:  Of course I know John Cleese isn’t a Muppet, but he might be the king of silly walks.