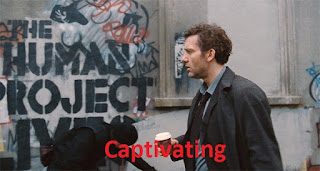 Lately in film, especially futuristic sci-fi fare, the preferred city of devastation is London.  It used to be that Godzilla would stomp Japan into oblivion, but of course we all know that giant lizards bred out of nuclear irresponsibility is completely far-fetched, right?  But putting fantasy away, London has been a hub the past decade or so for apocalyptic visions of the future.  From Rage viruses to an infertility pandemic, I’m not sure “Keep Calm and Carry On” would be enough for even London’s strongest citizens to get behind.  This brings me to 2006’s “Children of Men” one of the most captivating sci-fi films to be released in recent memory.
Here’s the scoop; we visit London in the not too distant future where there hasn’t been a reported new birth in nearly 18 years.  Just when you thought things couldn’t get any worse, the youngest person in the world, lovingly named Baby Diego, has just been murdered.  With the world in mourning, we follow happy-go-lucky Theo, played by Clive Owen.  Theo is the type of guy that loves to get high with his hippy friend Jaspar and get kidnapped by a terrorist group called “The Fishes” led by his former activist wife, Julian, played by Julianne Moore.  The plot thickens when it’s discovered that Theo is carrying some precious cargo, namely a baby in the belly of a young refugee girl named Kee.  With the government, crooked cops, and members of the terrorist group hot on his heels, Theo has no choice but to protect Kee and try and deliver her to The Human Project, a mysterious group researching why humanity become infertile so many years ago.

“Children” went largely unnoticed during its theatrical run, which is odd for how good this film really is.  The acting is spot on, the setting couldn’t feel more real, and the message is relatively universal.  Sure, there are some preachy moments, and even some of the imagery and names are obvious, case in point, the young girl Kee, (even though it’s technically pronounced “chi”) who just might be the “key” to civilization’s survival.  But those are minor quibbles.

Directed by Alfonso Cuaron, who some might know for “Y Tu Mama Tambien” or to an even wider audience as the director the best Harry Potter film installment “Harry Potter and the Prisoner of Azkaban.”  Some might disagree with that assessment of the “Harry Potter” franchise, but it was the moment that the series went from light-hearted and childish to dark, brooding, and serious.
Cuaron lends that trademark style to “Children” and creates a dystopian London where all hope seems to be lost, refugees are treated like Jews during World War II, and ethnic tensions are slowly coming to a head.  With all of that being said, Cuaron is still able to capture small glimmers of hope in a hopeless world, and some humanity in some of the more monstrous characters.  But the highlights of the film revolve around the long take action sequences which last upwards of 6 minutes.  Even though it has been debunked that these scenes are not one long take, the fact remains that these scenes highlight the film and create the most memorable moments in “Children.”

Despite the fact “Children” was critically praised, the fact it didn’t bank more at the box office was a crime in and of itself.  It’s also a movie I’m always shocked people have never seen; at that moment I slap them in the face, hand them the DVD, and bid them Godspeed.

Oz The Great And Powerful